English extreme metal band Venom, from Newcastle, crystallized the elements of what later became known as thrash metal, death metal and black metal, with their first two albums ''Welcome to Hell'' and ''Black Metal''. Their dark, blistering sound, harsh vocals, and macabre, proudly Satanic imagery proved a major inspiration for extreme metal bands. Another highly influential band, Slayer, formed in 1981. Although the band was a thrash metal act, Slayer's music was more violent than their thrash contemporaries Metallica, Megadeth, and Anthrax. Their breakneck speed and instrumental prowess combined with lyrics about death, violence, war, and Satanism won Slayer a cult following. According to Mike McPadden, ''Hell Awaits'', Slayer's sophomore album, "largely inventdmuch of the sound and fury that would evolve into death metal." According to AllMusic, their third album ''Reign in Blood'' inspired the entire death metal genre. It had a big impact on genre leaders such as Death, Obituary, and Morbid Angel.

Possessed, a band that formed in the San Francisco Bay Area during 1983, is described by Allmusic as "connecting the dots" between thrash metal and death metal with their 1985 debut album, ''Seven Churches''. While attributed as having a Slayer influence, current and former members of the band had actually cited Venom and Motörhead, as well as early work by Exodus, as the main influences on their sound. Although the group had released only two studio albums and an EP in their formative years, they have been described by music journalists and musicians as either being "monumental" in developing the death metal style, or as being the first death metal band. Earache Records noted that "the likes of Trey Azagthoth and Morbid Angel based what they were doing in their formative years on the Possessed blueprint laid down on the legendary ''Seven Churches'' recording. Possessed arguably did more to further the cause of 'Death Metal' than any of the early acts on the scene back in the mid-late 80's." 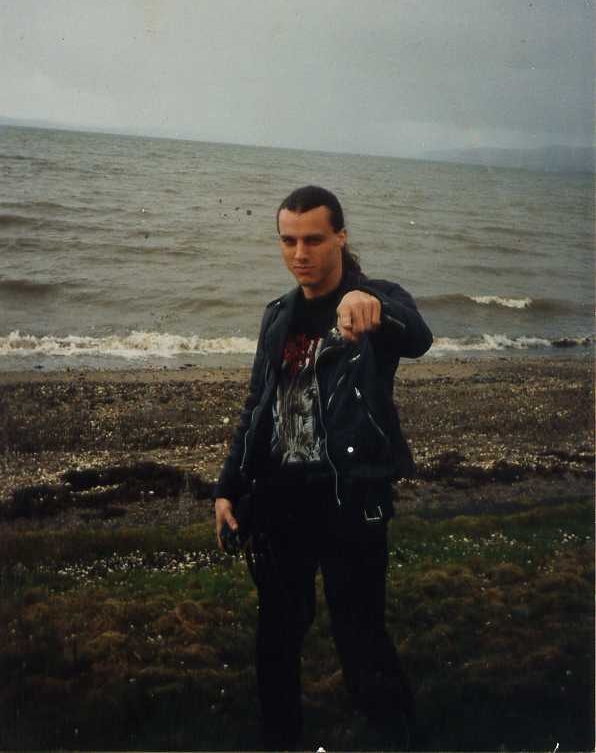 During the same period as the dawn of Possessed, a second influential metal band was formed in Orlando, Florida: Death. Originally called Mantas, Death was formed in 1983 by Chuck Schuldiner, Kam Lee, and Rick Rozz. In 1984, they released their first demo entitled ''Death by Metal'', followed by several more. The tapes circulated through the tape trader world, quickly establishing the band's name. With Death guitarist Schuldiner adopting vocal duties, the band made a major impact on the scene. The fast minor-key riffs and solos were complemented with fast drumming, creating a style that would catch on in tape trading circles. Schuldiner has been credited by Allmusic's Eduardo Rivadavia for being widely recognized as the "Father of Death Metal". Death's 1987 debut release, ''Scream Bloody Gore'', has been described by About.com's Chad Bowar as being the "evolution from thrash metal to death metal", and "the first true death metal record" by the ''San Francisco Chronicle''. In an Interview Jeff Becerra talked about the discussions of being the creator of the genre, saying that Schuldiner cited Possessed as a massive influence, and Death were even called "Possessed clones" early on. Along with Possessed and Death, other pioneers of death metal in the United States include Macabre, Master, Massacre, Immolation, Cannibal Corpse, Obituary, and Post Mortem.

By 1989, many bands had been signed by eager record labels wanting to cash in on the subgenre, including Florida's Obituary, Morbid Angel and Deicide. This collective of death metal bands hailing from Florida are often labeled as "Florida death metal". Morbid Angel pushed the genre's limits both musically and lyrically, with the release of their debut album ''Altars of Madness'' in 1989. The album "redefined what it meant to be heavy while influencing an upcoming class of brutal death metal." Death metal spread to Sweden in the late 1980s, flourishing with pioneers such as Carnage, God Macabre, Entombed, Dismember, Grave and Unleashed. In the early 1990s, the rise of melodic death metal was recognized, with Swedish bands such as Dark Tranquillity, At the Gates, and In Flames. Following the original death metal innovators, new subgenres began by the end of the decade. British band Napalm Death became increasingly associated with death metal, in particular, on their 1990 album ''Harmony Corruption''. This album displays aggressive and fairly technical guitar riffing, complex rhythmics, a sophisticated growling vocal delivery by Mark "Barney" Greenway, and socially aware lyrical subjects, merging death metal with the "grindcore" subgenre. Other bands contributing significantly to this early movement include Britain's Bolt Thrower and Carcass and New York's Suffocation. To close the circle, Death released their fourth album ''Human'' in 1991. Death's founder Schuldiner helped push the boundaries of uncompromising speed and technical virtuosity, mixing technical and intricate rhythm guitar work with complex arrangements and emotive guitar solos. Earache Records, Relativity Records and Roadrunner Records became the genre's most important labels, with Earache releasing albums by Carcass, Napalm Death, Morbid Angel, and Entombed, and Roadrunner releasing albums by Obituary, and Pestilence. Although these labels had not been death metal labels, initially, they became the genre's flagship labels in the beginning of the 1990s. In addition to these, other labels formed as well, such as Nuclear Blast, Century Media, and Peaceville. Many of these labels would go on to achieve successes in other genres of metal throughout the 1990s. In September 1990, Death's manager Eric Greif held one of the first North American death metal festivals, ''Day of Death'', in Milwaukee suburb Waukesha, Wisconsin, and featured 26 bands including Autopsy, Broken Hope, Hellwitch, Obliveon, Revenant, Viogression, Immolation, Atheist, and Cynic. 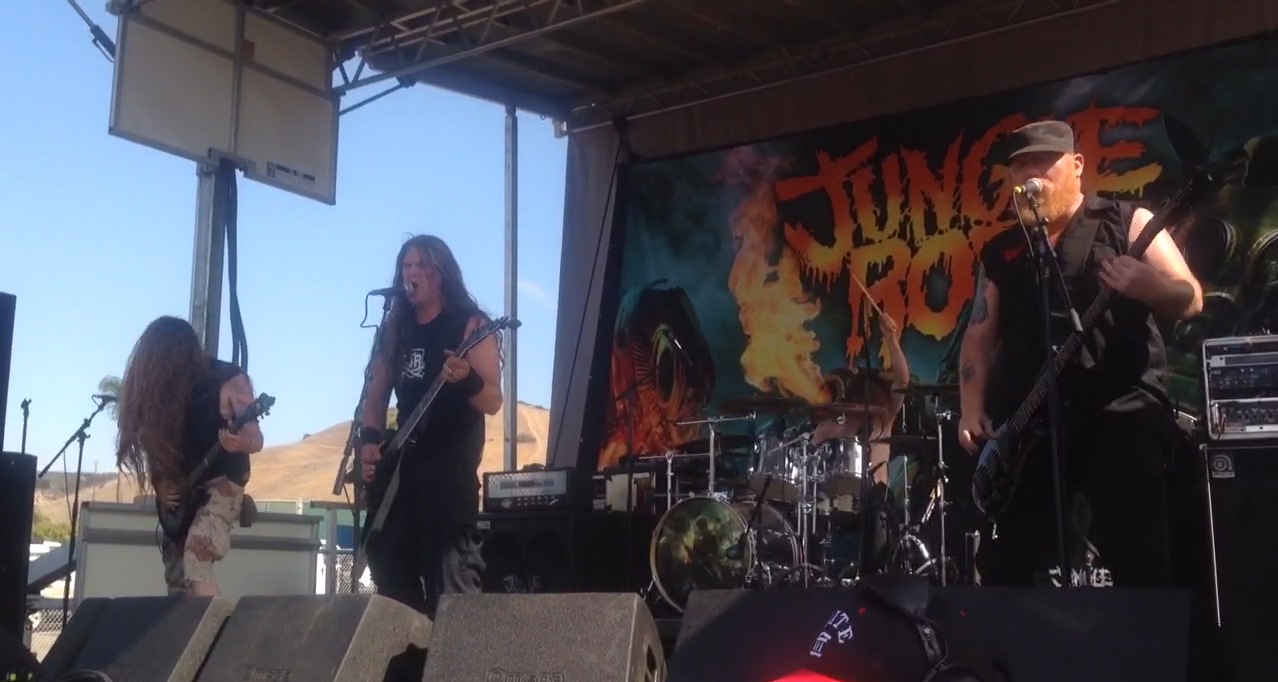 Death metal's popularity achieved its initial peak during 1992–1993, with some bands such as Morbid Angel and Cannibal Corpse enjoying mild commercial success. However, the genre as a whole never broke into the mainstream. The genre's mounting popularity may have been partly responsible for a strong rivalry between Norwegian black metal and Swedish death metal scenes. Fenriz of Darkthrone has noted that Norwegian black metal musicians were "fed up with the whole death metal scene" at the time. Death metal diversified in the 1990s, spawning a rich variety of subgenres that still have a large "underground" following at the present.

The setup most frequently used within the death metal genre is two guitarists, a bass player, a vocalist and a drummer often using "hyper double-bass blast beats". Although this is the standard setup, bands have been known to occasionally incorporate other instruments such as electronic keyboards. The genre is often identified by fast, heavily distorted and low tuned guitars, played with techniques such as palm muting and tremolo picking. The percussion is usually aggressive and powerful. Death metal is known for its abrupt tempo, key, and time signature changes. It may include chromatic chord progressions and a varied song structure. In some circumstances, the style will incorporate melodic riffs and harmonies for effect. This incorporation of melody and harmonious playing was even further used in the creation of melodic death metal. These compositions tend to emphasize an ongoing development of themes and motifs. 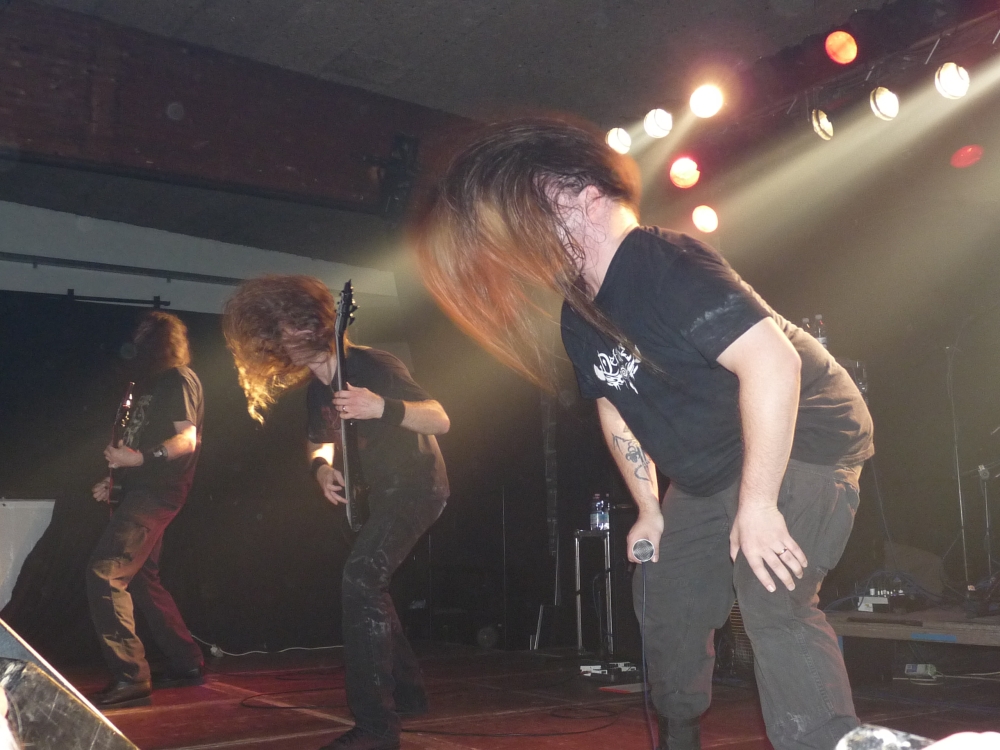 Death metal vocals are referred to as death growls; hoarse roars/snarls. Death growling is mistakenly thought to be a form of screaming using the lowest vocal register known as vocal fry, however vocal fry is actually a form of overtone screaming, and while growling can be performed this way by experienced vocalists who use the fry screaming technique, "true" death growling is in fact created by an altogether different technique. The three major methods of harsh vocalization used in the genre are often mistaken for each other, encompassing vocal fry screaming, false chord screaming, and "true" death growls. Growling is sometimes also referred to as Cookie Monster vocals, tongue-in-cheek, due to the vocal similarity to the voice of the popular ''Sesame Street'' character of the same name. Although often criticized, death growls serve the aesthetic purpose of matching death metal's aggressive lyrical content. High-pitched screaming is occasionally utilized in death metal, being heard in songs by Death, Aborted, Exhumed, Dying Fetus, Cannibal Corpse, and Deicide.

The lyrical themes of death metal may invoke slasher film-stylised violence, but may also extend to topics like religion (sometimes including Satanism), occultism, Lovecraftian horror, nature, mysticism, mythology, theology, philosophy, science fiction, and politics. Although violence may be explored in various other genres as well, death metal may elaborate on the details of extreme acts, including psychopathy, delirium, mutilation, mutation, dissection, exorcism, torture, rape, cannibalism, and necrophilia. Sociologist Keith Kahn-Harris commented this apparent glamorisation of violence may be attributed to a "fascination" with the human body that all people share to some degree, a fascination that mixes desire and disgust. Heavy metal author Gavin Baddeley also stated there does seem to be a connection between "how acquainted one is with their own mortality" and "how much they crave images of death and violence" via the media. Additionally, contributing artists to the genre often defend death metal as little more than an extreme form of art and entertainment, similar to horror films in the motion picture industry. This explanation has brought such musicians under fire from activists internationally, who claim that this is often lost on a large number of adolescents, who are left with the glamorisation of such violence without social context or awareness of why such imagery is stimulating. According to Alex Webster, bassist of Cannibal Corpse, "The gory lyrics are probably not, as much as people say, hat's keeping usfrom being mainstream. Like, 'death metal would never go into the mainstream because the lyrics are too gory?' I think it's really the music, because violent entertainment is totally mainstream."

Origin of the term

The most popular theory of the subgenre's christening is Possessed's 1984 demo, ''Death Metal''; the song from the eponymous demo would also be featured on the band's 1985 debut album, ''Seven Churches''. Possessed vocalist/bassist Jeff Becerra said he coined the term in early 1983 for a high school English class assignment. Another possible origin was a magazine called ''Death Metal'', started by Thomas Fischer and Martin Ain of Hellhammer and Celtic Frost. The name was later given to the 1984 compilation ''Death Metal'' released by Noise Records. The term might also have originated from other recordings, such as the demo released by Death in 1984, called ''Death by Metal''.

Cited examples are not necessarily exclusive to one particular style. Many bands can easily be placed in two or more of the following categories, and a band's specific categorization is often a source of contention due to personal opinion and interpretation.