Steven Anthony Ballmer (; born March 24, 1956) is an American billionaire businessman and investor who served as the chief executive officer of Microsoft from 2000 to 2014. He is the current owner of the Los Angeles Clippers of the National Basketball Association (NBA). As of April 2021, ''Bloomberg Billionaires Index'' estimates his personal wealth at US$93.9 billion, ranking him as the 9th richest person in the world. Ballmer was hired by Bill Gates at Microsoft in 1980, and subsequently left the MBA program at Stanford University. He eventually became president in 1998, and replaced Gates as CEO on January 13, 2000. On February 4, 2014, Ballmer retired as CEO and was replaced by Satya Nadella; Ballmer remained on Microsoft's Board of Directors until August 19, 2014, when he left to prepare for teaching a new class. His tenure and legacy as Microsoft CEO has received mixed reception, with the company tripling sales and doubling profits, but losing its market dominance and missing out on 21st-century technology trends such as the ascendance of smartphones in the form of iPhone and Android.

Ballmer was born in Detroit, Michigan; he is the son of Beatrice Dworkin and Frederic Henry Ballmer (Fritz Hans Ballmer), a manager at the Ford Motor Company. His father was a Swiss immigrant who predicted that his son, at eight years old, would attend Harvard. His mother was Belarusian Jewish. Through his mother, Ballmer is a second cousin of actress and comedian Gilda Radner. Ballmer grew up in the affluent community of Farmington Hills, Michigan. Ballmer also lived in Brussels from 1964 to 1967, where he attended the International School of Brussels. In 1973, he attended college prep and engineering classes at Lawrence Technological University. He graduated as valedictorian from Detroit Country Day School, a private college preparatory school in Beverly Hills, Michigan, with a score of 800 on the mathematical section of the SAT and was a National Merit Scholar. He now sits on the school's board of directors. In 1977, he graduated ''magna cum laude'' from Harvard University with a Bachelor of Arts in applied mathematics and economics. At college, Ballmer was a manager for the Harvard Crimson football team and a member of the Fox Club, worked on ''The Harvard Crimson'' newspaper as well as the ''Harvard Advocate'', and lived down the hall from fellow sophomore Bill Gates. He scored highly in the William Lowell Putnam Mathematical Competition, an exam sponsored by the Mathematical Association of America, scoring higher than Bill Gates. He then worked as an assistant product manager at Procter & Gamble for two years, where he shared an office with Jeff Immelt, who later became CEO of General Electric. After briefly trying to write screenplays in Hollywood, in 1980 Ballmer dropped out of the Stanford Graduate School of Business to join Microsoft.

Ballmer joined Microsoft on June 11, 1980, and became Microsoft's 30th employee, the first business manager hired by Gates. Ballmer was offered a salary of $50,000 as well as 5-10% of the company. When Microsoft was incorporated in 1981, Ballmer owned 8% of the company. In 2003, Ballmer sold 39.3 million Microsoft shares equating to approximately $955 million, thereby reducing his ownership to 4%. The same year, he replaced Microsoft's employee stock options program. In the 20 years following his hire, Ballmer headed several Microsoft divisions, including operations, operating systems development, and sales and support. From February 1992 onwards, he was Executive Vice President, Sales, and Support. Ballmer led Microsoft's development of the .NET Framework. Ballmer was then promoted to President of Microsoft, a title that he held from July 1998 to February 2001, making him the de facto number two in the company to the chairman and CEO, Bill Gates. 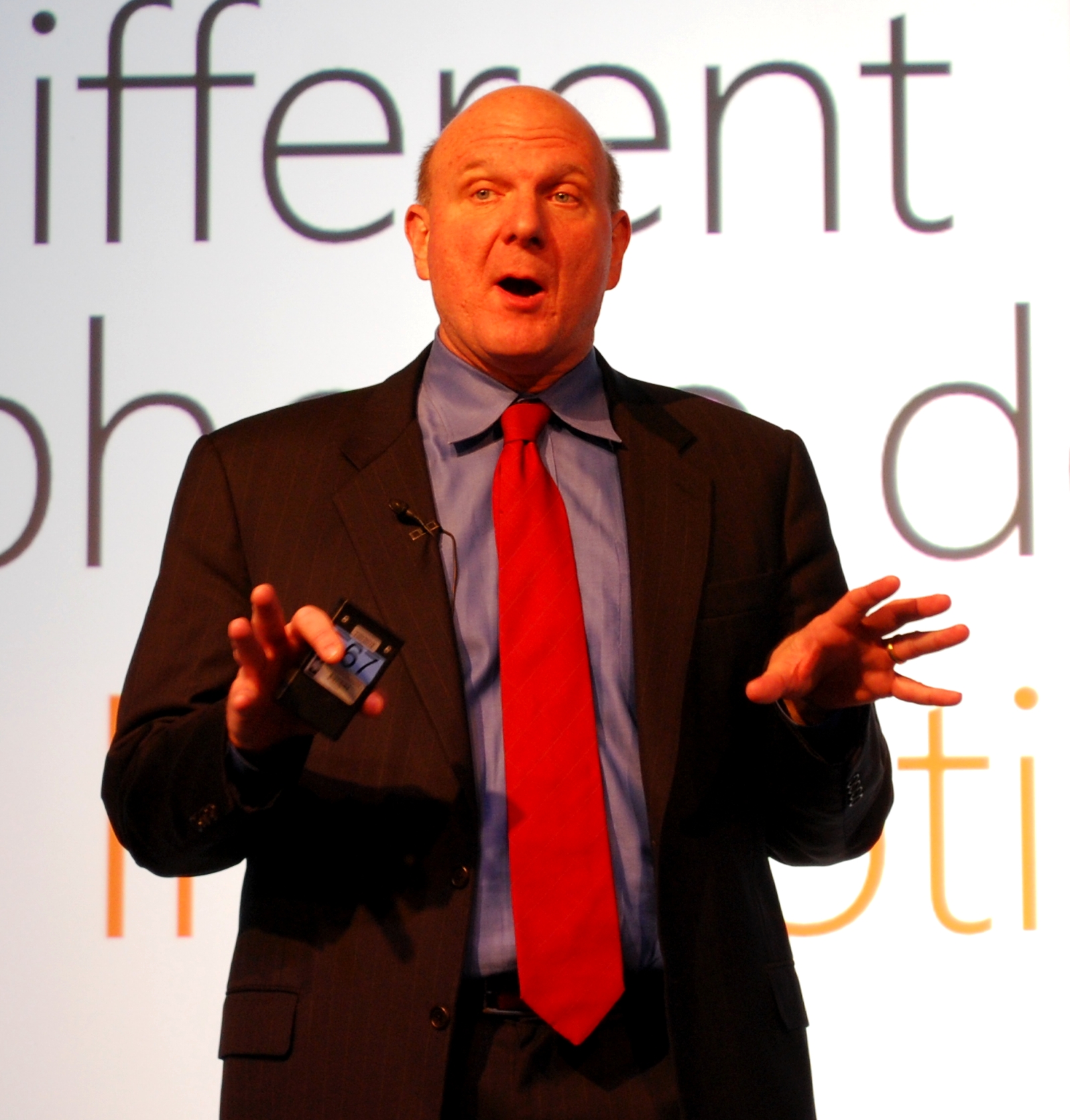 On January 13, 2000, Ballmer was officially named the chief executive officer. As CEO, Ballmer handled company finances and daily operations, but Gates remained chairman of the board and still retained control of the "technological vision" as chief software architect. Gates relinquished day-to-day activities when he stepped down as chief software architect in 2006, while staying on as chairman, and that gave Ballmer the autonomy needed to make major management changes at Microsoft. When Ballmer took over as CEO, the company was fighting an antitrust lawsuit brought on by the U.S. government and 20 states, plus class-action lawsuits and complaints from rival companies. While it was said that Gates would have continued fighting the suit, Ballmer made it his priority to settle these saying: "Being the object of a lawsuit, effectively, or a complaint from your government is a very awkward, uncomfortable position to be in. It just has all downside. People assume if the government brought a complaint that there's really a problem, and your ability to say we're a good, proper, moral place is tough. It's actually tough, even though you feel that way about yourselves." Upon becoming CEO, Ballmer required detailed business justification in order to approve of new products, rather than allowing hundreds of products that sounded potentially interesting or trendy. In 2005, he recruited B. Kevin Turner from Walmart, who was the President and CEO of Sam's Club, to become Microsoft's Chief Operating Officer. Turner was hired at Microsoft to lead the company's sales, marketing and services group and to instill more process and discipline in the company's operations and salesforce. Since Bill Gates' retirement, Ballmer oversaw a "dramatic shift away from the company's PC-first heritage", replacing most major division heads in order to break down the "talent-hoarding fiefdoms", and ''Businessweek'' said that the company "arguably now has the best product lineup in its history". Ballmer was instrumental in driving Microsoft's connected computing strategy, with acquisitions such as Skype. Under Ballmer's tenure as CEO, Microsoft's share price stagnated. The lackluster stock performance occurred despite Microsoft's financial success at that time. The company's annual revenue surged from $25 billion to $70 billion, while its net income increased 215% to $23 billion, and its gross profit of 75 cents on every dollar in sales is double that of Google or IBM. In terms of leading the company's total annual profit growth, Ballmer's tenure at Microsoft (16.4%) surpassed the performances of other well-known CEOs such as General Electric's Jack Welch (11.2%) and IBM's Louis V. Gerstner Jr. (2%). These gains came from the existing Windows and Office franchises, with Ballmer maintaining their profitability, fending off threats from competitors such as GNU/Linux and other open-source operating systems and Google Docs. Ballmer also built half a dozen new businesses, such as the data centers division and the Xbox entertainment and devices division ($8.9 billion), (which has prevented the Sony PlayStation and other gaming consoles from undermining Windows), and oversaw the acquisition of Skype. Ballmer also constructed the company's $20 billion Enterprise Business, consisting of new products and services such as Exchange, Windows Server, SQL Server, SharePoint, System Center, and Dynamics CRM, each of which initially faced an uphill battle for acceptance but have emerged as leading or dominant in each category. This diversified product mix helped to offset the company's reliance on PCs and mobile computing devices as the company entered the Post-PC era; in reporting quarterly results during April 2013, while Windows Phone 8 and Windows 8 had not managed to increase their market share above single digits, the company increased its profit 19% over the previous quarter in 2012, as the Microsoft Business Division (including Office 365) and Server and Tools division (cloud services) are each larger than the Windows division. Ballmer attracted criticism for failing to capitalize on several new consumer technologies, forcing Microsoft to play catch-up in the areas of tablet computing, smartphones and music players with mixed results. Under Ballmer's watch, "In many cases, Microsoft latched onto technologies like smartphones, touchscreens, 'smart' cars and wristwatches that read sports scores aloud long before Apple or Google did. But it repeatedly killed promising projects if they threatened its cash cows indows and Office" Ballmer was even named one of the worst CEOs of 2013 by the BBC. As a result of these many criticisms, in May 2012, hedge fund manager David Einhorn called on Ballmer to step down as CEO of Microsoft. "His continued presence is the biggest overhang on Microsoft's stock," Einhorn said in reference to Ballmer. In a May 2012 column in ''Forbes'' magazine, Adam Hartung described Ballmer as "the worst CEO of a large publicly traded American company", saying he had "steered Microsoft out of some of the fastest growing and most lucrative tech markets (mobile music, headsets and tablets)". In 2009, and for the first time since Bill Gates resigned from day-to-day management at Microsoft, Ballmer delivered the opening keynote at CES. 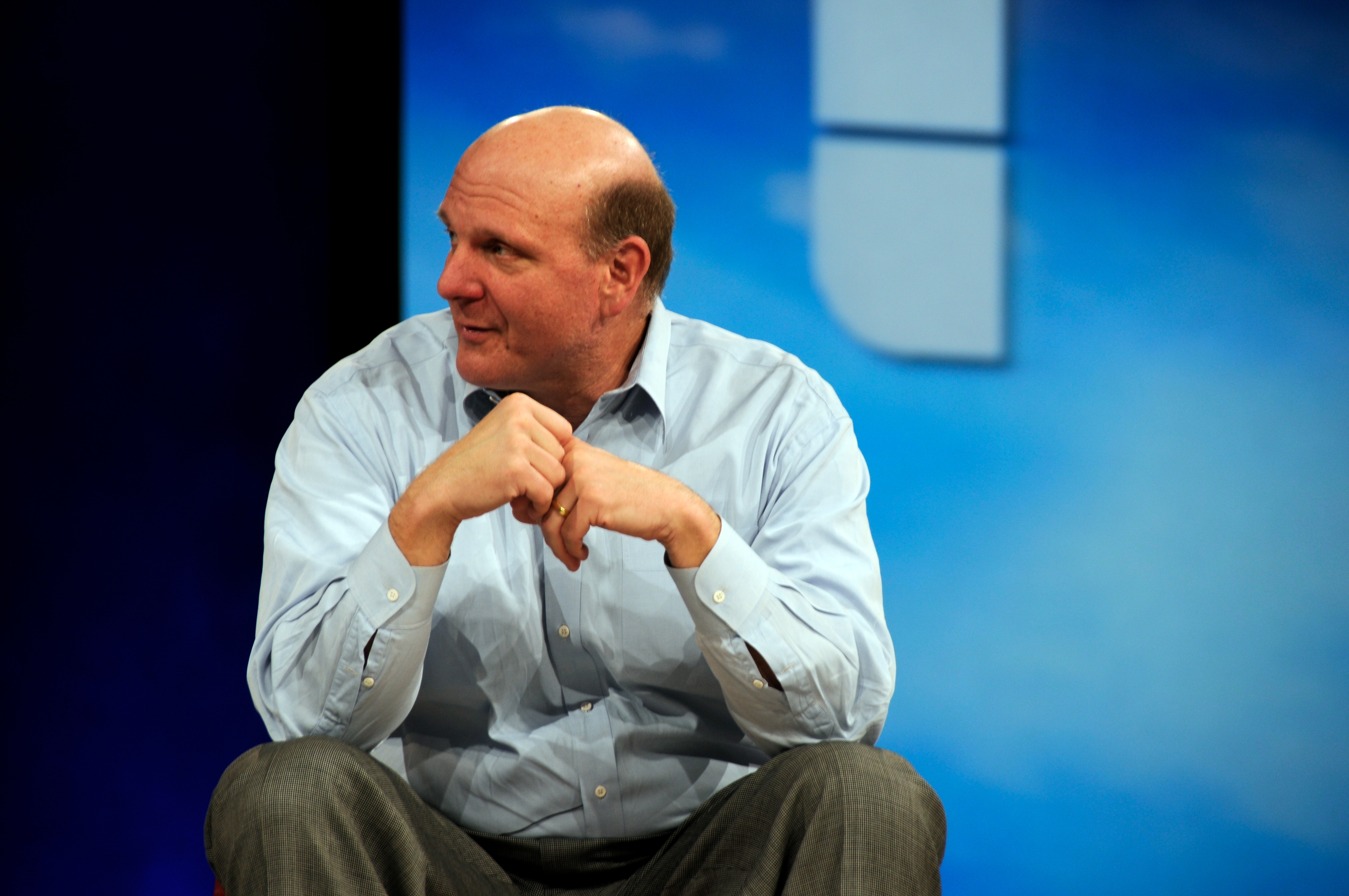 As part of his plans to expand on hardware, on June 19, 2012, Ballmer revealed Microsoft's first ever computer device, a tablet called Microsoft Surface at an event held in Hollywood, Los Angeles. He followed this by announcing the company's purchase of Nokia's mobile phone division in September 2013, his last major acquisition for Microsoft as CEO. On August 23, 2013, Microsoft announced that Ballmer would retire within the next 12 months. A special committee that included Bill Gates would decide on the next CEO. There was a list of potential successors to Ballmer as Microsoft CEO, but all had departed the company: Jim Allchin, Brad Silverberg, Paul Maritz, Nathan Myhrvold, Greg Maffei, Pete Higgins, Jeff Raikes, J. Allard, Robbie Bach, Bill Veghte, Ray Ozzie, Bob Muglia and Steven Sinofsky. B. Kevin Turner, Microsoft's Chief Operating Officer (COO), was considered by some to be a ''de facto'' number two to Ballmer, with Turner having a strong grasp of business and operations but lacking technological vision. On February 4, 2014, Satya Nadella succeeded Ballmer as CEO.