Staples Center (officially stylized as STAPLES Center) is a multi-purpose arena in Downtown Los Angeles. Adjacent to the L.A. Live development, it is located next to the Los Angeles Convention Center complex along Figueroa Street. The arena opened on October 17, 1999. It is owned and operated by the Arturo L.A. Arena Company and Anschutz Entertainment Group. The arena is home venue to the Los Angeles Kings of the National Hockey League (NHL), the Los Angeles Lakers and the Los Angeles Clippers of the National Basketball Association (NBA), and the Los Angeles Sparks of the Women's National Basketball Association (WNBA). The Los Angeles Avengers of the Arena Football League (AFL) and the Los Angeles D-Fenders of the NBA D-League were also tenants; the Avengers were folded in 2009, and the D-Fenders moved to the Lakers' practice facility at the Toyota Sports Center in El Segundo, California for the 2011–12 season. Staples Center is also host to over 250 events and nearly 4 million guests each year. It is the only arena in the NBA shared by two teams, as well as one of only three North American professional sports venues to host two teams from the same league; MetLife Stadium, the home of the National Football League's New York Giants and New York Jets, is one; SoFi Stadium, the home of the National Football League's Los Angeles Chargers and Los Angeles Rams, is the other. Staples Center is the venue of the Grammy Awards ceremony and will host the basketball competition during the 2028 Summer Olympics. On August 24, 2020, a day the city of Los Angeles designated Kobe Bryant Day to honor former Lakers guard Kobe Bryant who died in a helicopter crash in January of that year, the City of Los Angeles announced that Figueroa Street between Olympic and Martin Luther King Jr., which includes the area Staples Center is on, will be renamed Kobe Bryant Boulevard.

Staples Center measures of total space, with a by arena floor. It stands tall. The arena seats up to 19,067 for basketball, 18,340 for ice hockey, and around 20,000 for concerts or other sporting events. Two-thirds of the arena's seating, including 2,500 club seats, are in the lower bowl. There are also 160 luxury suites, including 15 event suites, on three levels between the lower and upper bowls. The arena's attendance record is held by the fight between World WBA Welterweight Champion, Antonio Margarito and Shane Mosley with a crowd of 20,820 set on January 25, 2009. ;Star Plaza Outside the arena at the Star Plaza are statues of famous Los Angeles athletes and broadcasters. An 11th statue, honoring Los Angeles Sparks center Lisa Leslie, is slated to be unveiled in the future. ; Secret tunnel On January 15, 2018, in the aftermath of an NBA basketball game between the Houston Rockets and the Los Angeles Clippers, point guard Chris Paul utilized a secret tunnel (connecting the away team's locker room to the backdoor of the Clippers locker room) to confront former Clipper teammates Austin Rivers and Blake Griffin. Paul was joined by teammates, Trevor Ariza, James Harden, and Gerald Green to confront the opponents, which only resulted in verbal altercations. 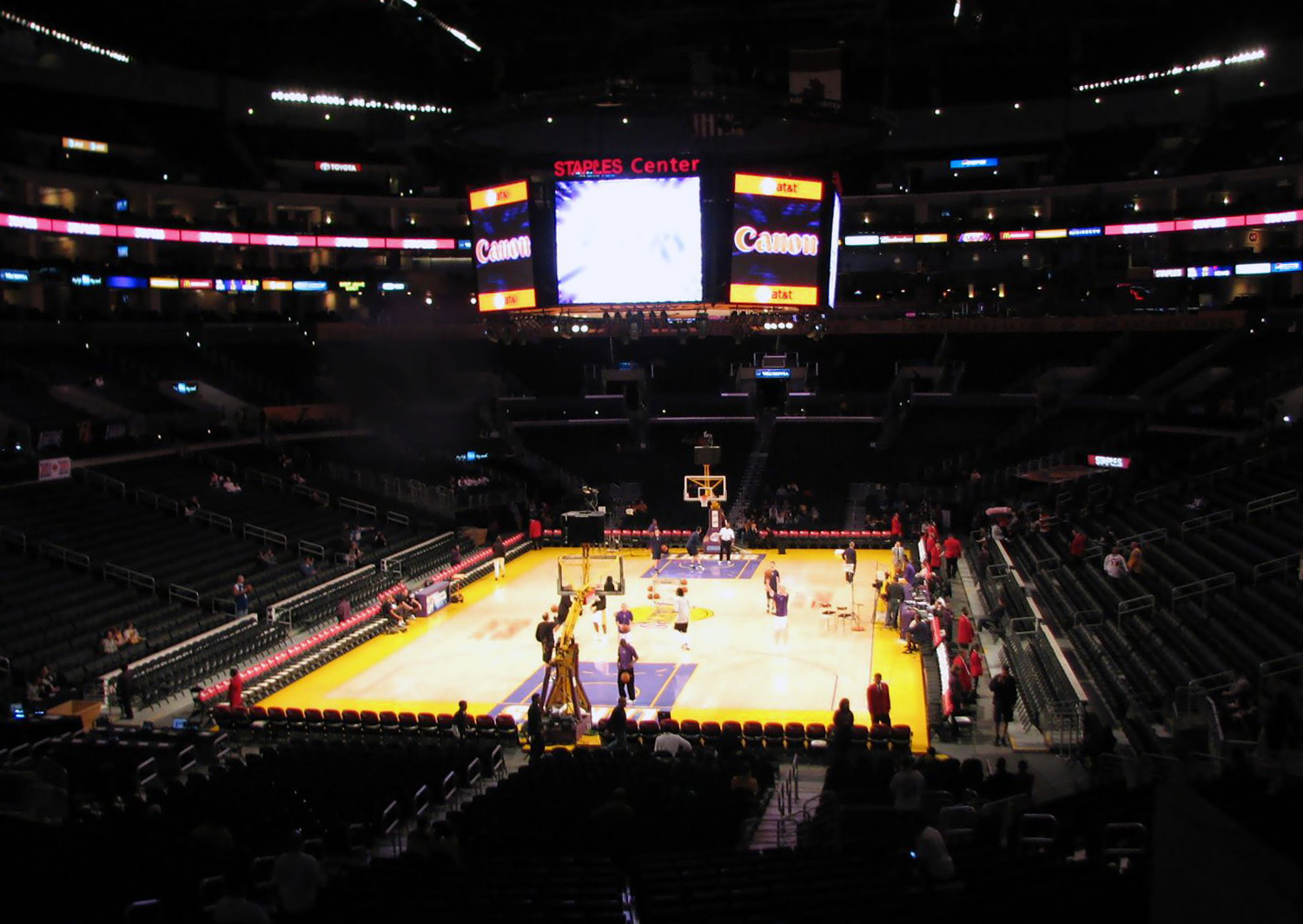 Staples Center has been referred to as "the deal that almost wasn't." Long before construction broke ground, plans for the arena were negotiated between elected city officials and real estate developers Edward P. Roski of Majestic Realty and Philip Anschutz. Roski and Anschutz had acquired the Los Angeles Kings in 1995 and in 1996 began looking for a new home for their team, which then played at the Forum in Inglewood. Majestic Realty Co. and AEG were scouring the Los Angeles area for available land to develop an arena when they were approached by Steve Soboroff, then president of the LA Recreation and Parks Commission. Soboroff requested that they consider building the arena in downtown Los Angeles adjacent to the convention center. This proposal intrigued Roski and Anschutz, and soon a plan to develop the arena, the current Staples Center, was devised. Months of negotiations ensued between Anschutz and city officials, with Roski and John Semcken of Majestic Realty Co. spearheading the negotiations for the real estate developers. The negotiations grew contentious at times and the real estate developers threatened to pull out altogether on more than one occasion. The main opposition came from Councilman Joel Wachs, who opposed utilizing public funds to subsidize the proposed project, and councilwoman Rita Walters, who objected to parts of it. Ultimately, the developers and city leaders reached an agreement, and in 1997, construction broke ground on the new building, which opened two years later. It was financed privately at a cost of US$375 million and is named for the office-supply company Staples, Inc., which was one of the center's corporate sponsors that paid for naming rights. The arena opened on October 17, 1999, with a Bruce Springsteen & The E Street Band concert as its inaugural event. On October 21, 2009, Staples Center celebrated its 10th anniversary. To commemorate the occasion, the venue's official web site nominated 25 of the arena's greatest moments from its first ten years with fans voting on the top ten. During the late summer of 2010, modifications were made to the arena, including refurbished locker rooms for the Clippers, Kings, and Lakers and the installation of a new US$10 million HD center-hung video scoreboard and jumbotron, replacing the original one that had been in place since the building opened in 1999. The Panasonic Live 4HD scoreboard was officially unveiled on September 22, 2010, as AEG and Staples Center executives, as well as player representatives from the Clippers (Craig Smith), Kings (Matt Greene), and Lakers (Sasha Vujacic) were on hand for the presentation. Following the sudden death of former basketball player Kobe Bryant in January 2020, a number of media outlets picked up on a phrase used by some, referring to the stadium as "The House That Kobe Built", due to his historic 20-year career with the Lakers.

Bruce Springsteen & The E Street Band were the first act to perform at the venue on its opening in 1999. After his death in 2009, Michael Jackson's memorial service was held at Staples Center. Rapper Nipsey Hussle's memorial service was also held at Staples Center on April 11, 2019. Staples Center also hosted the 1st Annual Latin Grammy Awards in 2000 and the 2012 MTV Video Music Awards. Taylor Swift has performed 16 sold-out shows at the venue; the most appearances at the venue by a female artist. Mexican Superstar and Latin Pop Queen Gloria Trevi along with Mexican Queen of Rock Alejandra Guzman performed two sold-out nights of their Versus World Tour. 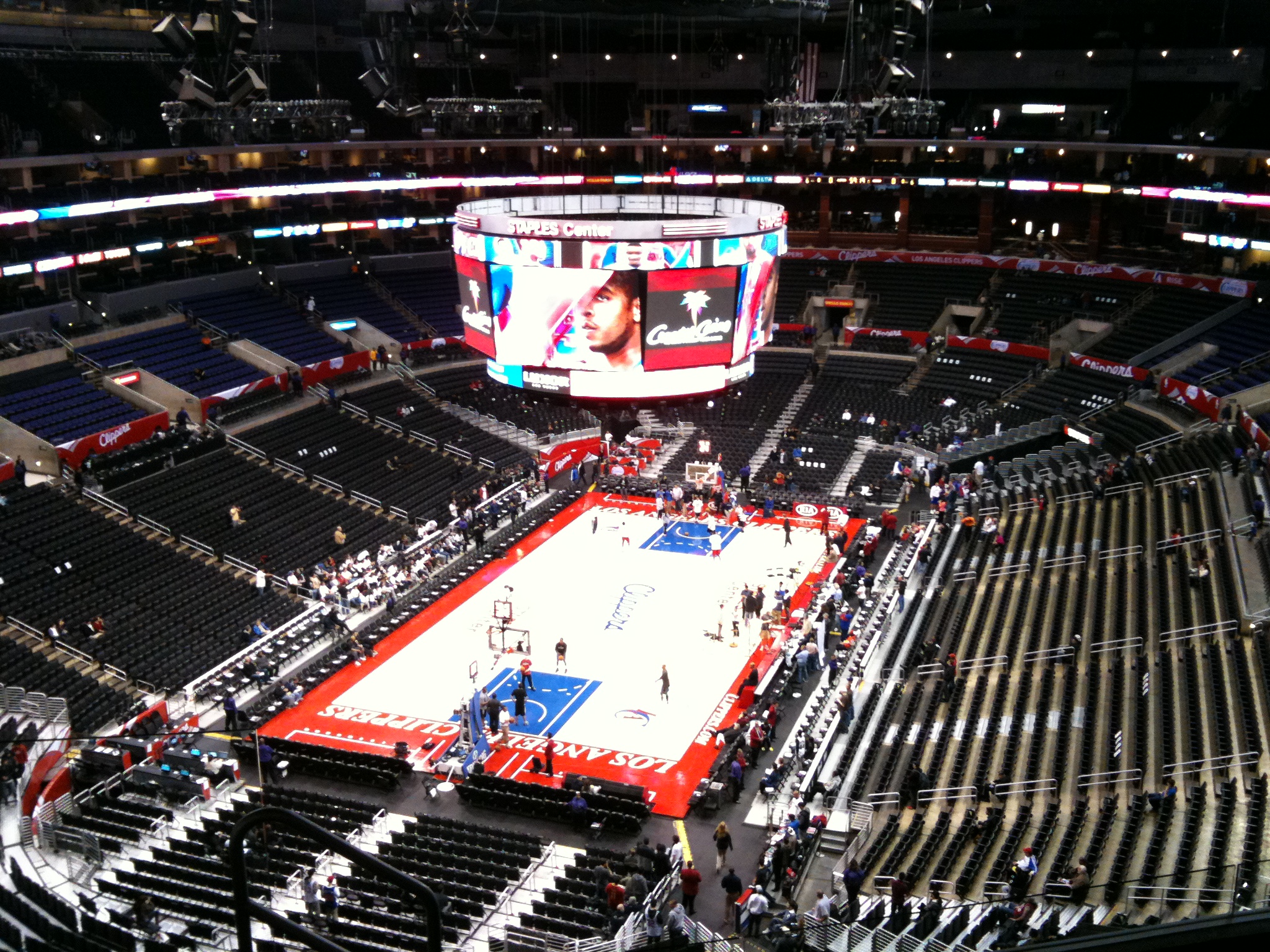 On January 22, 2006, Los Angeles Lakers player Kobe Bryant scored a career-high 81 points in the Staples Center against the Toronto Raptors, the second-highest number of points scored in a single game in NBA history, second only to Wilt Chamberlain's 100-point performance. Of the team's six NBA championships since moving to the venue, the Lakers have celebrated their and victories at Staples Center with series-winning victories at home. Prior to the 2006–07 NBA season, the lighting inside Staples Center was modified for Lakers games. The lights were focused only on the court itself (hence the promotional ''Lights Out'' campaign), reminiscent of the Lakers' early years at The Forum. The initial fan reaction was positive and has been a fixture on home games since. The Daktronics see-through shot-clock was first installed prior to the 2008–09 NBA season. The Clippers adopted the new see-through shot clock prior to the 2010–11 NBA season. For Sparks games, the court used is named after Sparks player Lisa Leslie, and was officially named prior to the 2009 home opener against the Shock on June 6, 2009. The Los Angeles Kings, of the NHL hosted the 2010 NHL Entry Draft at the arena in June 2010. The Stanley Cup Finals were held at the arena for the first time in . The Kings hosted the New Jersey Devils in games 3, 4, and ultimately defeated the Devils in game 6 by a final score of 6–1. The Kings became the first team to win the Stanley Cup on home ice since . During the spring of 2012, NHL's Kings, along with NBA's Lakers and Clippers reached the post-season, making it the first time the arena would host three playoff teams. The Lakers unveiled a new hardwood court before their preseason game on October 13, 2012. Taking a cue from soccer clubs, the primary center court logo was adorned with 16 stars, representing the 16 championships the Lakers franchise has won. A 17th star was added to the court and unveiled before their regular season opener on December 22, 2020 to represent the franchise winning its 17th championship in the 2020 NBA Finals.

On June 9, 2019, the ACE Family hosted a charity basketball game against singer Chris Brown. On November 9, 2019, the STAPLES Center hosted the rematch against YouTubers KSI and Logan Paul. On February 24, 2020, Staples Center hosted a memorial commemorating Laker legend Kobe Bryant and his daughter Gianna, after they, and seven others, were killed in a helicopter crash a month earlier. On November 28, 2020, STAPLES Center hosted The exhibition match against retired boxers Mike Tyson and Roy Jones Jr.

Staples Center will host the basketball competition at the 2028 Summer Olympics. It will host men's preliminaries as well as the men's and women's basketball finals.

The 2000 Democratic National Convention was held at Staples Center.

Staples Center was named Best Major Concert Venue for 1998 and Arena of the Year for 1999, 2000 and 2001 by ''Pollstar'' Magazine and has been nominated each year since 2000. In February 2013, PETA named Staples Center the most "vegetarian-friendly" arena in the NBA.