Salvador (English: ''Savior''), also known as São Salvador da Bahia de Todos os Santos (English: ''Holy Savior of the Bay of All Saints''), is the capital of the Brazilian state of Bahia. With 2.9 million people (2020), it is the largest city proper in the Northeast Region and the 4th largest city proper in the country, after São Paulo, Rio de Janeiro and Brasília. Founded by the Portuguese in 1549 as the first capital of Brazil, Salvador is one of the oldest colonial cities in the Americas. A sharp escarpment divides its Lower Town (') from its Upper Town (') by some . The ', Brazil's first urban elevator, has connected the two since 1873. The Pelourinho district of the upper town, still home to many examples of Portuguese colonial architecture and historical monuments, was named a World Heritage Site by UNESCO in 1985. The city's cathedral is the see of the primate of Brazil and its Carnival celebration has been reckoned as the largest party in the world. Salvador was one of the first slave ports in the Americas and the African influence of the slaves' descendants makes it a center of Afro-Brazilian (') culture. The city is noted for its cuisine, music, dance and architecture. Porto da Barra Beach in Barra has been named one of the best beaches in the world. Itaipava Arena Fonte Nova was the site of the city's games during the 2014 Brazilian World Cup and 2013 Confederations Cup. Salvador forms the heart of the ', Bahia's rich agricultural and industrial maritime district, and continues to be a major Brazilian port. Its metropolitan area, housing 3,899,533 people (2018) forms the wealthiest one in Brazil's Northeast Region (2015). 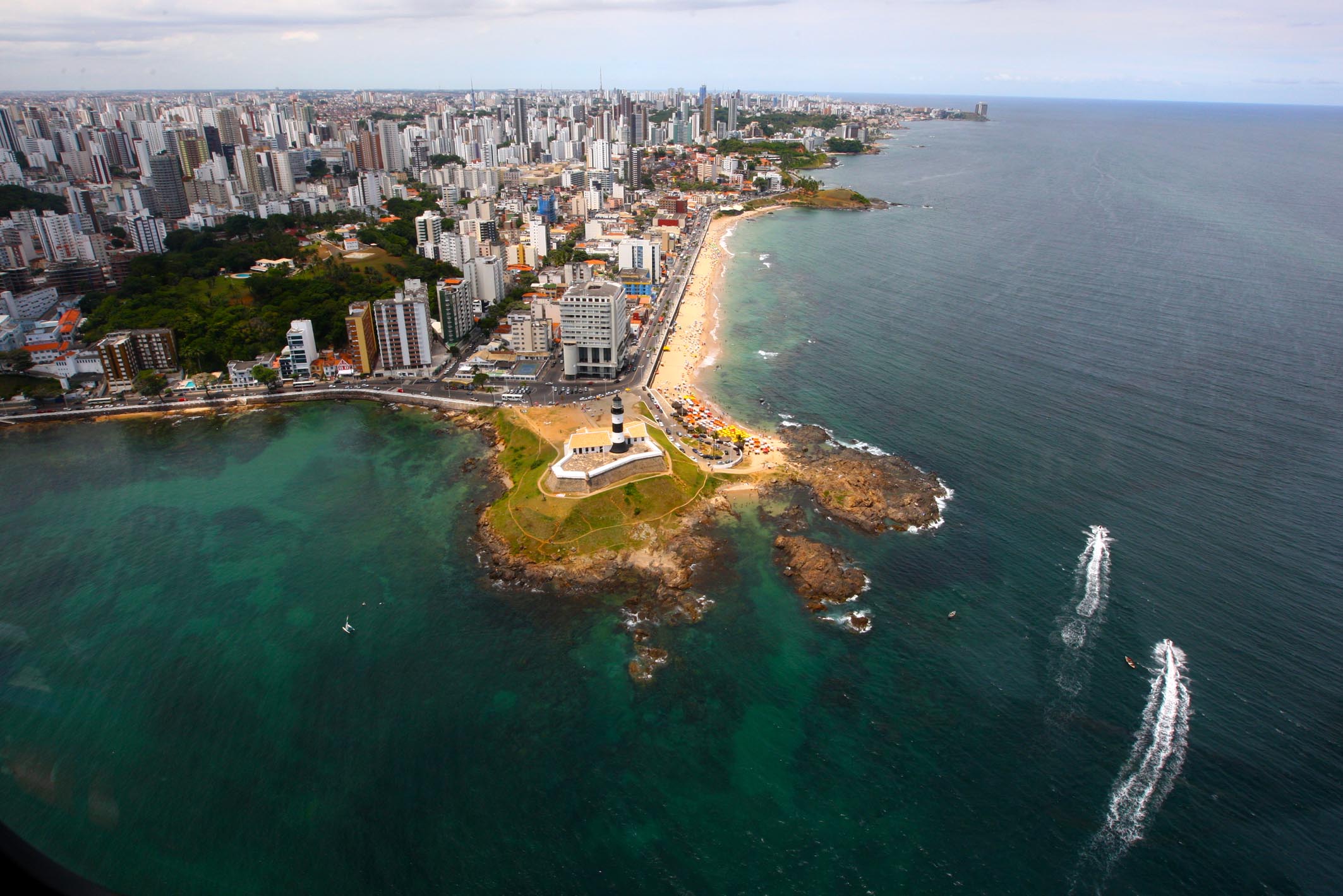 Salvador lies on a small, roughly triangular peninsula that separates the Bay of All Saints, the largest bay in Brazil, from the Atlantic Ocean. It was first reached by Gaspar de Lemos in 1501, just one year after Cabral's purported discovery of Brazil. During his second voyage for Portugal, the Italian explorer Amerigo Vespucci sighted the bay on All Saints' Day (1 November) 1502 and, in honor of the date and his parish church in Florence, he named it the Bay of the Holy Savior of All the Saints. The first European to settle nearby was Diogo Álvares Correia ("Caramuru"), who was shipwrecked off the end of the peninsula in 1509. He lived among the Tupinambá, marrying Guaibimpara and others. In 1531, Martim Afonso de Sousa led an expedition from Mount St Paul (') and, in 1534, Francisco Pereira Coutinho, the first captain of Bahia, established the settlement of Pereira in modern Salvador's Ladeira da Barra neighborhood. Mistreatment of the Tupinambá by the settlers caused them to turn hostile and the Portuguese were forced to flee to Porto Seguro . An attempted restoration of the colony the next year ended in shipwreck and cannibalism. The present city was established as the fortress of da Bahia de ("Holy Savior of the Bay of All Saints") in 1549 by Portuguese settlers under Tomé de Sousa, Brazil's first governor-general. It is one of the oldest cities founded by Europeans in the Americas. From a cliff overlooking the Bay of All Saints, it served as Brazil's first capital and quickly became a major port for its slave trade and sugarcane industry. Salvador was long divided into an upper and a lower city, divided by a sharp escarpment some high. The upper city formed the administrative, religious, and primary residential districts while the lower city was the commercial center, with a port and market. In the Roman Catholic Church, Brazil and the rest of the Portuguese Empire were initially administered as part of the Diocese of Funchal in Portugal but, in 1551, Salvador became the seat of the first Roman Catholic diocese erected in Brazil. The first parish church