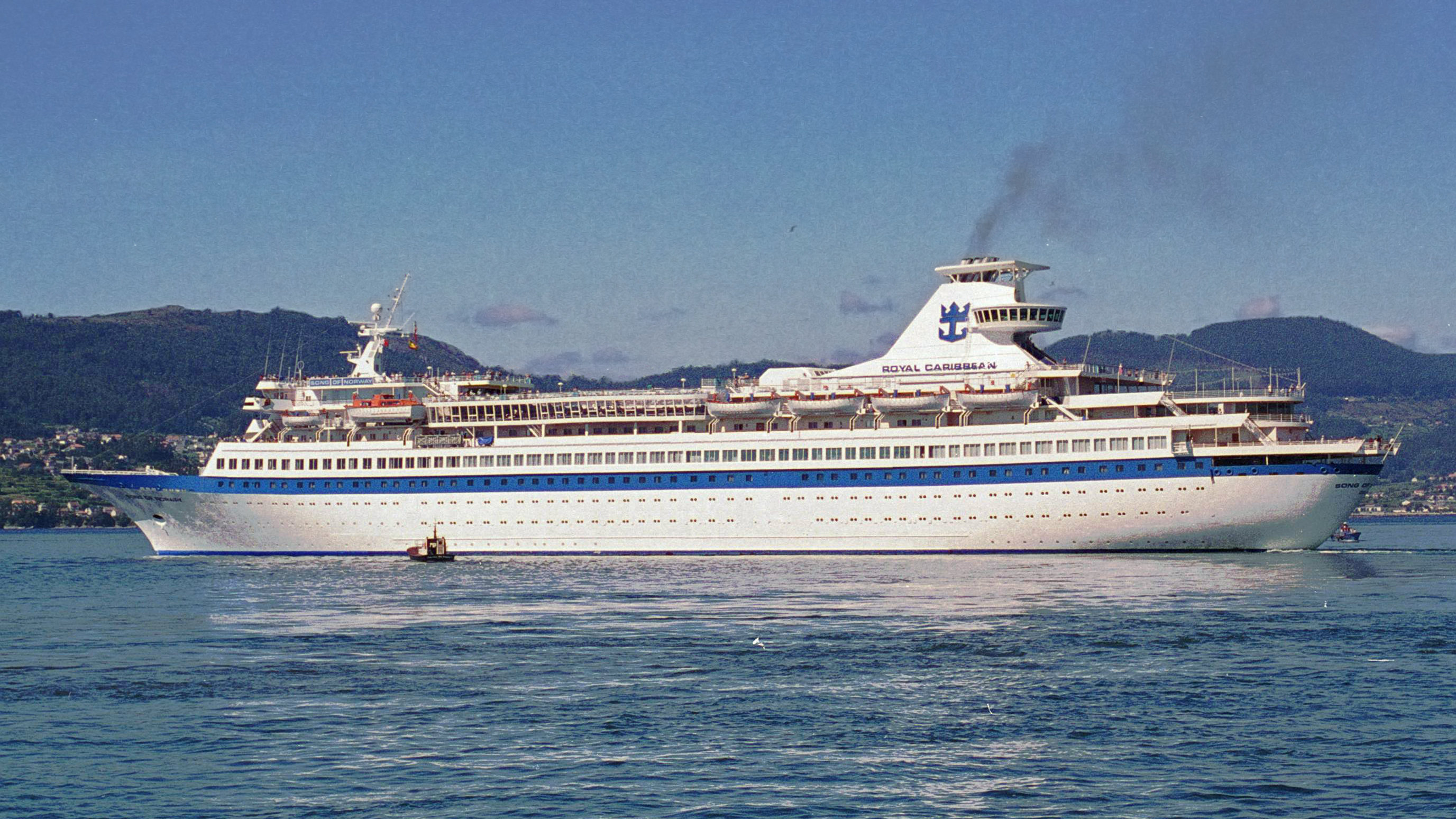 Royal Caribbean Cruise Line was founded in 1968 by three Norwegian shipping companies: Anders Wilhelmsen & Company, I.M. Skaugen & Company, and Gotaas Larsen. The newly created line put its first ship, ''Song of Norway'', into service two years later. A year later, the line added ''Nordic Prince'' to the fleet and in 1972 it added ''Sun Viking''. In 1978, ''Song of Norway'' became Royal Caribbean's first passenger ship to be lengthened. This was accomplished via the insertion of an section to the vessel's severed center. Following the success of this work, ''Nordic Prince'' was also stretched in 1980. During the stretching of both ships, their sterns were modified, however ''Sun Viking'' was not stretched or modified. In 1982, Royal Caribbean launched ''Song of America'', over twice the size of ''Sun Viking'' and at the time the third largest passenger vessel afloat (after ''Norway'' and ). 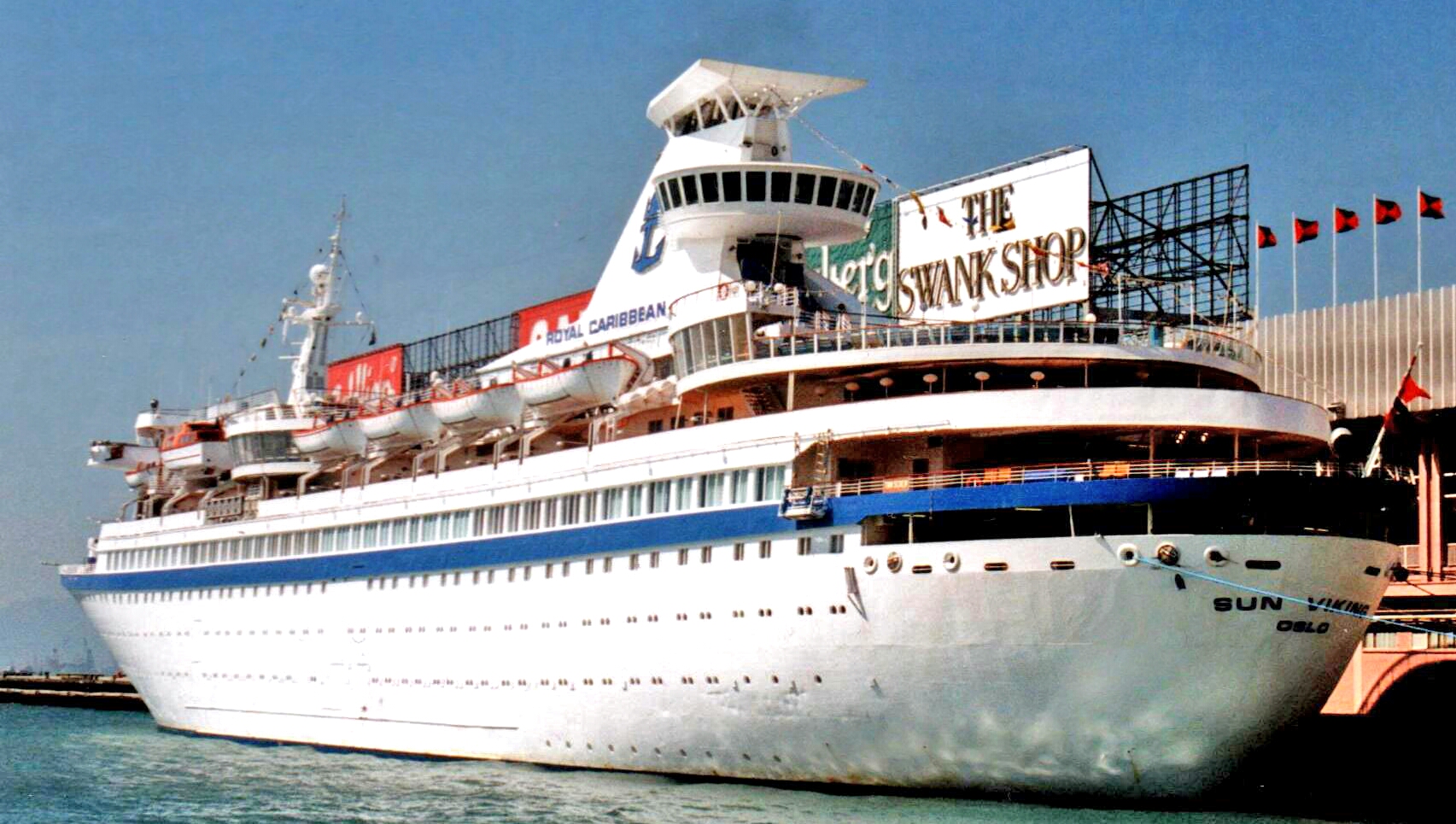 In 1986, Royal Caribbean leased a coastal property in Labadie, Haiti, to be used as a private destination for its guests, renamed as Labadee. After a corporate restructuring in 1988, the line launched ''Sovereign of the Seas'', the largest passenger vessel afloat at the time. That same year, Royal Caribbean also merged with Admiral Cruises. Two years later in 1990, ''Nordic Empress'' and ''Viking Serenade'' entered service and Royal Caribbean purchased a second private destination, Little Stirrup Cay, an island in the Bahamas, which they branded as CocoCay. 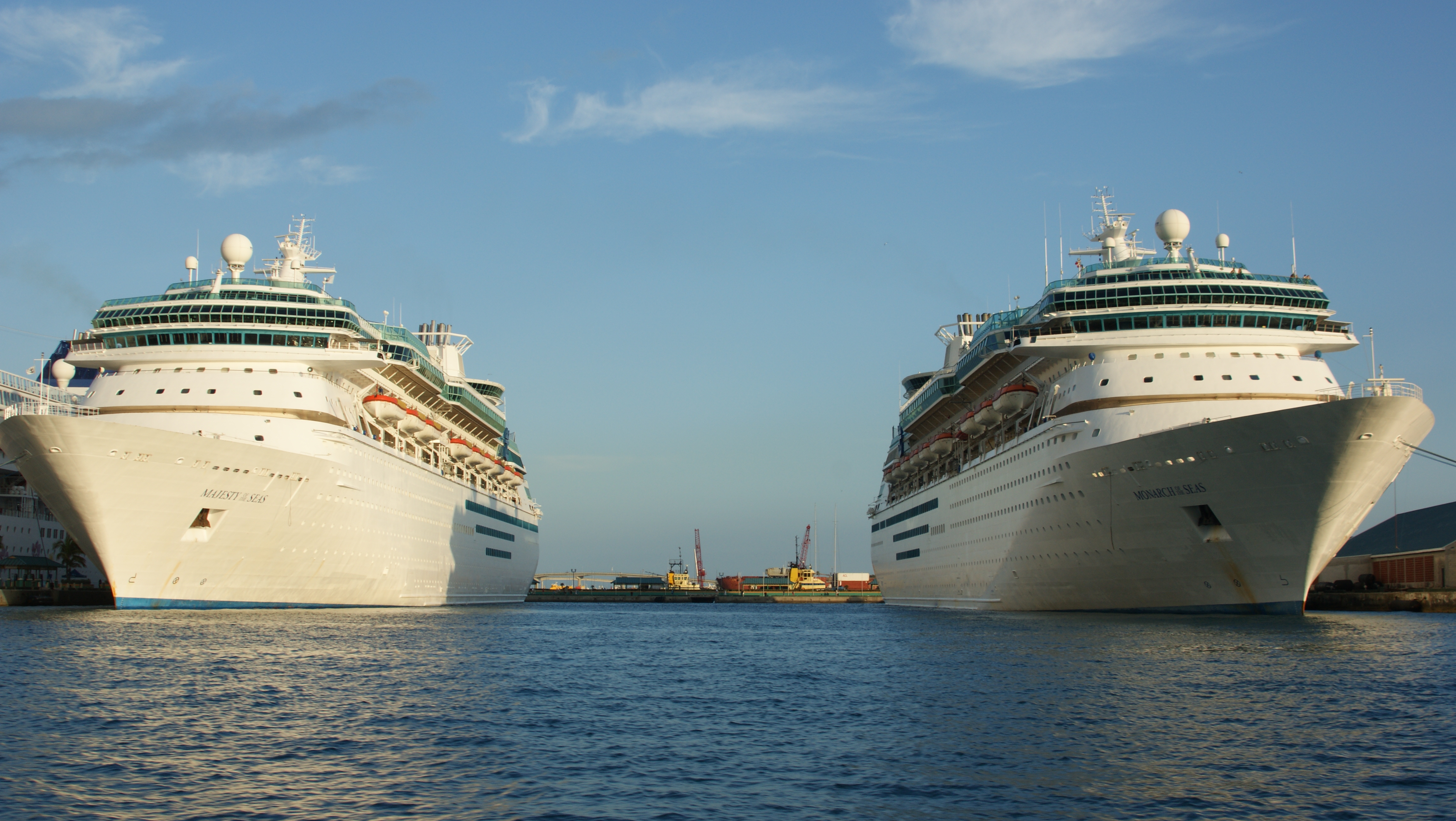 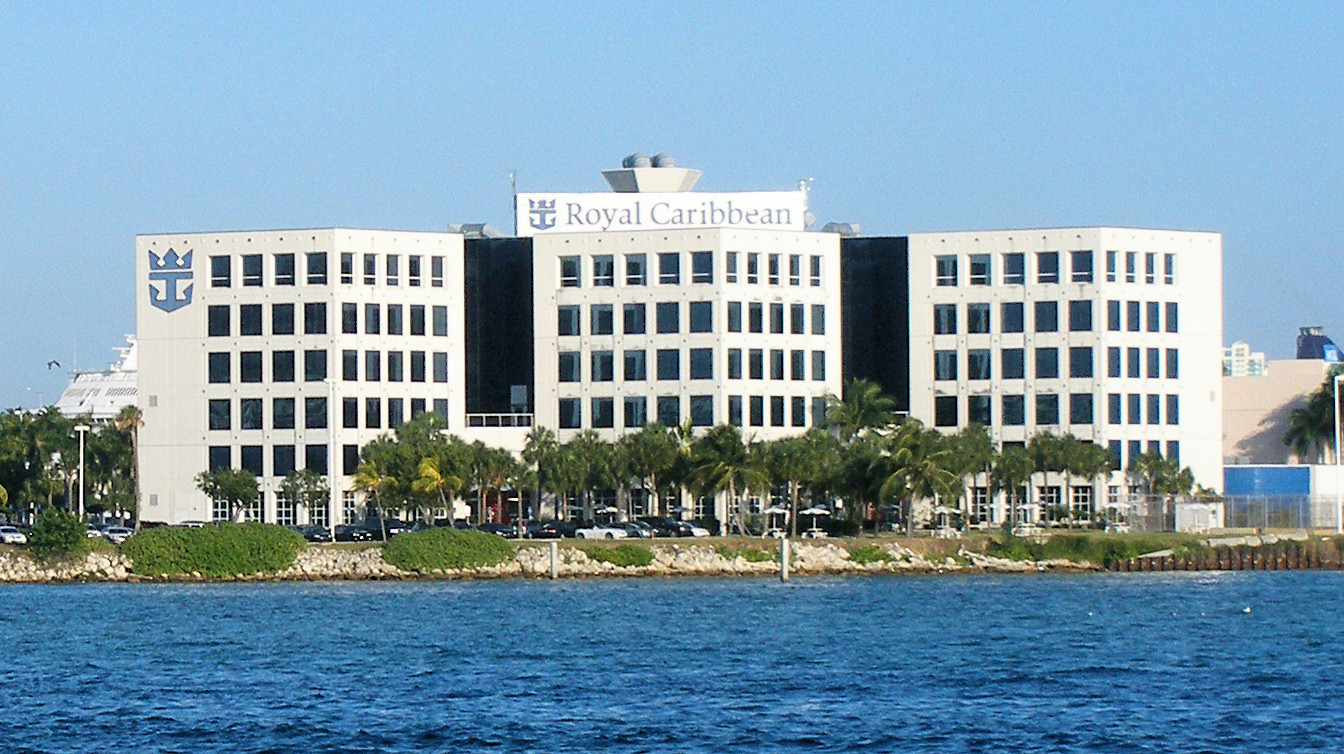 Since ''Sovereign of the Seas'' entered service in 1987, all subsequent Royal Caribbean ships have names ending with the phrase "of the Seas".

The ''Voyager''-class ships were the largest class of cruise ships in the world when constructed and were the first ships to have an ice rink at sea and the first to have Royal Caribbean's "Royal Promenade" mall concept, a main thoroughfare extending most of the length of the ship, flanked by bars, cafes, and shopping venues. They were built at Kvaerner Masa-Yards' (now Meyer Turku) facility in Turku, Finland. They have a gross tonnage of around 137,000 tonnes. Activity options onboard all five ships include a basketball court, at least three pools, a mini-golf course, a rock wall, an ice skating rink and, originally, an inline skating track. ''Navigator of the Seas'' replaced the inline skating track with a Flowrider surf simulator in 2014, and similar changes are planned for ''Voyager'' and ''Explorer''. ''Navigator of the Seas'' and ''Mariner of the Seas'' are second-generation ''Voyager''-class vessels, and feature glass stateroom balconies that extend out from the superstructure of the ship and a larger Windjammer buffet area.

All ''Radiance''-class ships have a gross tonnage of 90,090 and environmentally friendlier gas turbine engines. The ''Radiance''-class ships have over of glass, glass exterior viewing elevators, over 700 balcony staterooms, two-level glass windowed dining rooms, alternative restaurants, a retractable glass roof over a pool, an outdoor pool, as well as the first self-leveling billiard tables at sea. The ''Radiance'' class ships were constructed at Meyer Werft, Papenburg, Germany. Unlike the preceding ''Voyager'' class, these ships are built to the Panamax form factor, allowing them to pass through the Panama Canal.

The ''Freedom''-class ships are lengthened versions of the second-generation ''Voyager''-class ship, and contain a Royal Promenade mall running much of the length of the ship, an ice skating rink, basketball court, several pools, a mini-golf course, and a rock wall. New features on the ''Freedom'' class include the FlowRider surfing simulator, the H2O Zone kids water play area, a boxing ring, and hot tubs cantilevered over the side of the ship. At 154,407 gross tons, the ''Freedom''-class ships were the largest ships in the world from 2006, until the debut of the Oasis class in 2009.

The ''Oasis''-class ships are the largest passenger ships ever built, having surpassed the ''Freedom''-class ships. They can accommodate up to 5,400 passengers at double occupancy and they have a maximum capacity of 6,296 passengers. Furthermore, the ships have a gross tonnage of at least 225,282 tons, and cost the line around US$1.4 billion each. The first two ships in the class, ''Oasis of the Seas'' and ''Allure of the Seas'', were delivered in 2009 and 2010 by STX Europe Turku Shipyard, Finland. The third and fourth ships in the class, ''Harmony of the Seas'' and ''Symphony of the Seas'' were built at Chantiers de l'Atlantique in Saint-Nazaire, France. Royal Caribbean International, in conjunction with USA Today, sponsored a contest to name the first two vessels. On 18 February 2019 Royal Caribbean announced the order of a 6th Oasis class vessel from Chantiers de l'Atlantique for delivery in 2023 with a double occupancy of 5,714 and gross tonnage of 231,000.

The ''Quantum''-class of ships debuted as the second largest class of cruise ships in the world. The ''Quantum''-class ships were the first ships built for Royal Caribbean by Meyer Werft since the ''Radiance'' class and share many features with those ships, including indoor pools with retractable roofs, vast expanses of glass, outdoor seating in the "Windjammer" buffet, and self-leveling pool tables. Other distinctive features of the ''Quantum''-class include the "North Star" observation capsule mounted on the end of a crane arm, "RipCord by iFLY" a skydiving simulator, the three-deck-high Two70° lounge and performance venue at the aft of the ship featuring panoramic windows that convert into projection screens, and the multi-purpose SeaPlex facility which hosts activities such as basketball, roller skating, bumper cars, and a trapeze school. The ''Quantum'' class was the first class designed specifically for Dynamic Dining, and feature several separate complementary dining facilities instead of a single main dining room. Each venue will maintain the same menu and staff throughout the cruise. Unlike the earlier ''Voyager'', ''Freedom'', and ''Oasis'' class, ''Quantum''-class ships do not feature a Viking Crown Lounge or ice skating rink, and the Royal Promenade mall down the center of the ship is not featured in its traditional form. Four ships, ''Quantum of the Seas'', ''Anthem of the Seas'', ''Ovation of the Seas'', and ''Spectrum of the Seas'' have been built so far. A fifth ship, ''Odyssey of the Seas'' was delivered in March 2021.

Royal Caribbean operates two privately owned resorts that are used as stops on some Caribbean and Bahamas itineraries. They are Labadee, a resort on the northern coast of Haiti, and Coco Cay, a private island in the Berry Islands region of the Bahamas. Each resort features canopies for eating, lounge chairs, palm trees, white sand beaches, and a number of activities. The company is planning to open additional private resorts in Asia and on Lelepa Island, Vanuatu.

Royal Caribbean operates internationally and has many ports of call.

The cruise line has been presented with more than 100 notable awards during the course of 2019 and 2020. Previous Travel awards include * "Best Cruise Line Overall" 2016 by ''Travel Weekly'' *"Cruise Line of the Year 2018" by Cruisedaily

As of 2008, Royal Caribbean had 22% of the market share in cruise line operation. Cruise line operators are criticized for using this large economic impact to cut deals with home ports, ports of call, and agencies.

In January 2014, an outbreak of norovirus aboard ''Explorer of the Seas'' sickened 689 of 4,237 passengers and crew (16.3%), causing the ship to return to port two days early. The outbreak reportedly marked the greatest number of cases of illness aboard a cruise ship in two decades, barely exceeding a 2006 outbreak aboard the Carnival Cruise Lines' ''Carnival Liberty'' that sickened 679 of 3,970 passengers and crew (17.1%). Royal Caribbean offered all passengers aboard that cruise a 50% refund of their cruise fare, an additional 50% (plus 10% for each day sick passengers were quarantined) of their cruise fare as a credit towards another cruise, and reimbursed extra travel expenses for guests returning home early.

In the aftermath of the 2010 Haiti earthquake, Royal Caribbean continued docking cruise ships at the Labadee resort, located approximately 60 miles from the epicenter of the earthquake, during the ongoing humanitarian crisis. Royal Caribbean vice president John Weis defended the decision, citing relief supplies delivered through the ships and proceeds from the call going towards relief efforts. The decision to continue docking was criticized nonetheless and created concern among passengers.

On 5 July 2005, passengers on board ''Brilliance of the Seas'' reported what appeared to be blood on a part of the ship below the passenger balconies. After a search, George Allen Smith was discovered to be missing and thought to have fallen overboard. A criminal investigation into possible foul play was conducted, and a brief press release on the company's investor relations website announced the settlement of the case, later revealed to be more than $1 million.

In 1998 and 1999, the company was fined US$9 million because one of its ships, ''Sovereign of the Seas'', had repeatedly dumped oily waste into the ocean and tried to hide this using false records, including fake piping diagrams given to the US Coast Guard. Because the company was and is incorporated in Liberia, Royal Caribbean argued that this case was not in the jurisdiction of US courts. Despite their argument, they were unsuccessful.

On 9 December 2019, a volcanic eruption occurred killing 21 people from . It occurred on New Zealand's White Island (Whakaari) while ''Ovation'' was docked in the nearby Port of Tauranga. Despite an increase in seismic activity in preceding weeks 47 people, including 38 passengers and crew from the ship, were on the island when it erupted. , 44 of the 47 were injured, missing, or killed. A Royal Caribbean spokesperson said the line was "devastated by today’s events", and the ship remained in port until 10 December to assist with recovery efforts. In April 2020, legal action was commenced in Australia on behalf of relatives and ''Ovation'' passengers against Royal Caribbean.

On 7 July 2019, 18-month old Chloe Rae Margaret Wiegand was dropped to her death from an open window by her grandfather Salvatore Anello on while docked in San Juan, Puerto Rico. He was later arrested on counts of homicide by authorities in Puerto Rico. The family attempted to file a civil suit against Royal Caribbean claiming that Anello did not know the window was open. Royal Caribbean later released several videos from surveillance cameras showing the incident. As of 25 February 2020, Anello took a plea deal with authorities, however the civil lawsuit was still approved by a judge.

During the COVID-19 pandemic, the ''Miami Herald'' reported that, after cruises were cancelled worldwide and they had disembarked all passengers, Royal Caribbean Cruises had refused to repatriate many of their crew members due to the associated costs, with many crew members turning to desperate measures, such as hunger strikes, as a result. As part of the Cruise Line International Association (CLIA), Royal Caribbean has volunteered to pause operations through 31 October 2020. Previously, the pause was to end on 15 September 2020. At the end of October 2020, Royal Caribbean extended its global sailing suspension through December 2020. That suspension was then extended through April 30, 2021.