A town square (or square, plaza, public square, city square, urban square, or piazza) is an open public space commonly found in the heart of a traditional town used for community gatherings. Related concepts are the civic center, the market square and the village green. Most squares are hardscapes suitable for open markets, concerts, political rallies, and other events that require firm ground. Being centrally located, town squares are usually surrounded by small shops such as bakeries, meat markets, cheese stores, and clothing stores. At their center is often a well, monument, statue or other feature. Those with fountains are sometimes called fountain squares.

The city centre of Adelaide and the adjacent suburb of North Adelaide, in South Australia, were planned by Colonel William Light in 1837. The city streets were laid out in a grid plan, with the city centre including a central public square, Victoria Square, and four public squares in the centre of each quarter of the city. North Adelaide has two public squares. The city was also designed to be surrounded by park lands, and all of these features still exist today, with the squares maintained as mostly green spaces.

In Mainland China, People's Square is a common designation for the central town square of modern Chinese cities, established as part of urban modernization within the last few decades. These squares are the site of government buildings, museums and other public buildings. The best-known and largest of such squares in China is probably Tiananmen Square.

The German word for square is ''Platz'', which also means "Place", and is a common term for central squares in German-speaking countries. These have been focal points of public life in towns and cities from the Middle Ages to today. Squares located opposite a Palace or Castle (german: Schloss) are commonly named Schlossplatz. Prominent ''Plätze'' include the Alexanderplatz, Pariser Platz and Potsdamer Platz in Berlin, Heldenplatz in Vienna, and the Königsplatz in Munich. 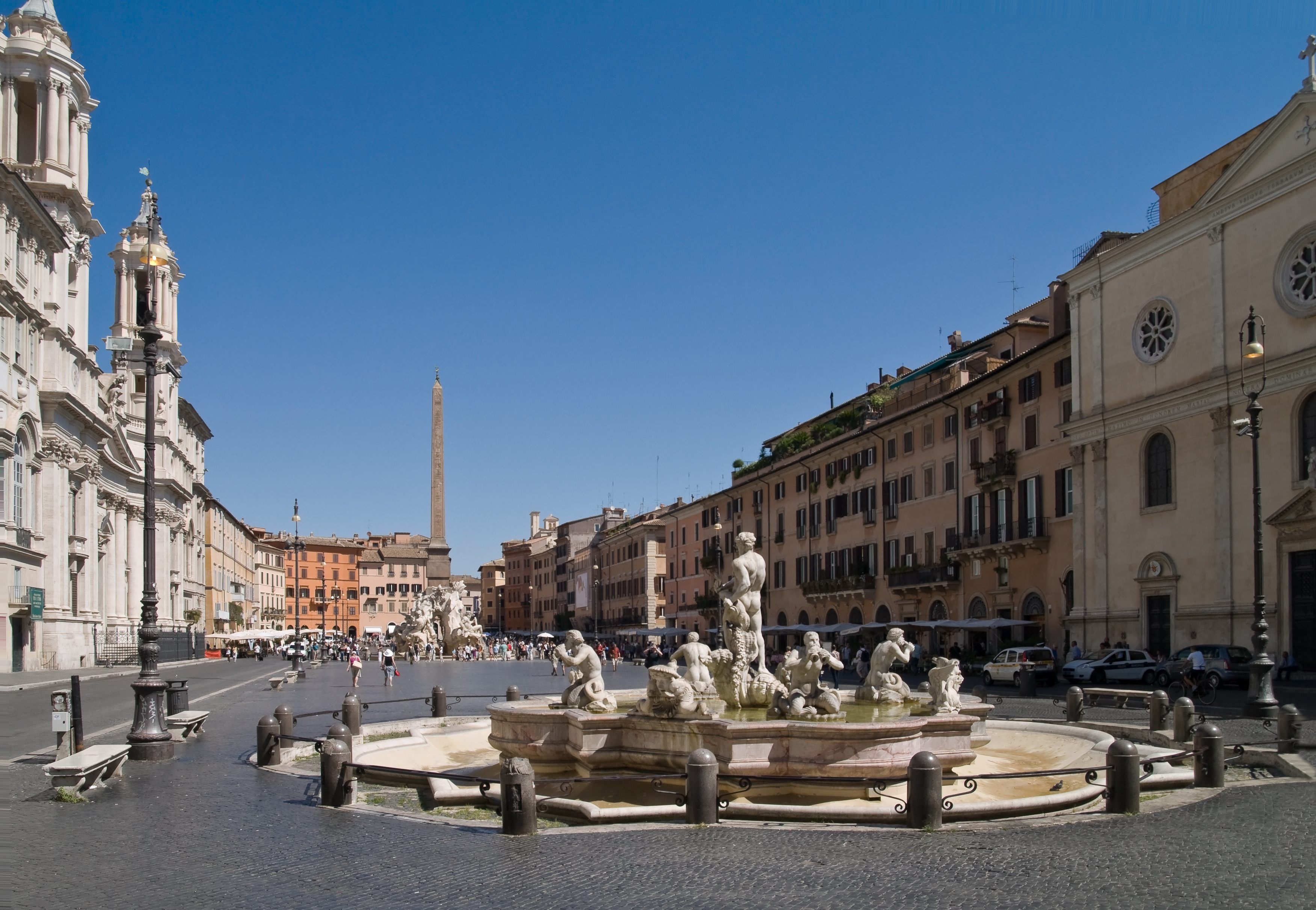 A piazza () is a city square in Italy, Malta, along the Dalmatian coast and in surrounding regions. San Marco in Venice may be the world's best known. The term is roughly equivalent to the Spanish ''plaza''. In Ethiopia, it is used to refer to a part of a city. When the Earl of Bedford developed Covent Garden – the first private-venture public square built in London – his architect Inigo Jones surrounded it with arcades, in the Italian fashion. Talk about the ''piazza'' was connected in Londoners' minds not with the square as a whole, but with the arcades. A piazza is commonly found at the meeting of two or more streets. Most Italian cities have several piazzas with streets radiating from the center. Shops and other small businesses are found on piazzas as it is an ideal place to set up a business. Many metro stations and bus stops are found on piazzas as they are key point in a city. In Britain, ''piazza'' now generally refers to a paved open pedestrian space, without grass or planting, often in front of a significant building or shops. King's Cross station in London is to have a piazza as part of its redevelopment. The piazza will replace the existing 1970s concourse and allow the original 1850s façade to be seen again. There is a good example of a piazza in Scotswood at Newcastle College. In the United States, in the early 19th century, a ''piazza'' by further extension became a fanciful name for a colonnaded porch. Piazza was used by some, especially in the Boston area, to refer to a verandah or front porch of a house or apartment. A central square just off Gibraltar's Main Street, between the Parliament Building and the City Hall officially named ''John Mackintosh Square'' is colloquially referred to as ''The Piazza''.

A large open square common in villages, towns and cities of Indonesia is known as ''alun-alun''. It is a Javanese term which in modern-day Indonesia refers to the two large open squares of kraton compounds. It is typically located adjacent a mosque or a palace. It is a place for public spectacles, court celebrations and general non-court entertainments. 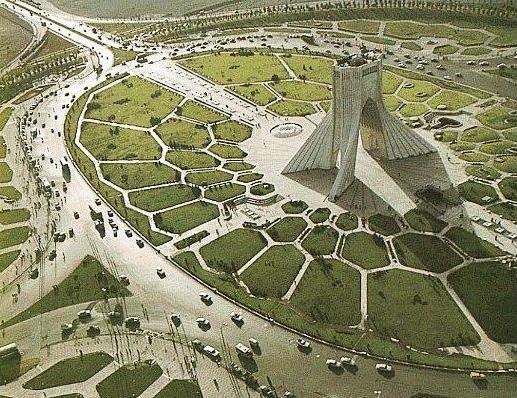 In traditional Persian architecture, town squares are known as maydan or meydan. A maydan is considered as one of the essential features in urban planning and they are often adjacent to bazaars, large mosques and other public buildings. Naqsh-e Jahan Square in Isfahan and Azadi Square in Tehran are examples of classic and modern squares.

The Netherlands and Belgium

Squares are often called "market" because of the usage of the square as a market place. Almost every town in Belgium and the southern part of the Netherlands has a "Grote Markt" in Dutch or "Grand Place" in French (for example the Grand Place in Brussels). The "Grote Markt" is often the place where the town hall is situated and therefore the centre of the town. Similar naming can be found in surrounding regions as for example Cologne has several central squares named "-markt" or "Markt" (Heumarkt, Neumarkt, Alter Markt).

In Russia, ''central square'' (russian: центра́льная пло́щадь, romanised: ''tsentráĺnaya plóshchad́'') is a common term for an open area in the heart of the town. In a number of cities, the square has no individual name and is officially designated ''Central Square'', for example Central Square (Tolyatti).

The Spanish-language term for a public square is plaza, and this term is used across Spain, Spanish America, the southwestern United States, and The Philippines. In addition to smaller plazas, the Plaza Mayor (in Spanish colonies sometimes called ''Plaza de Armas'', "armament square", where troops could be mustered) of each center of administration held three closely related institutions: the cathedral, the ''cantabile'' or administrative center, which might be incorporated in a wing of a governor's palace, and the ''audience'' or law court. The plaza might be large enough to serve as a military parade ground. At times of crisis or fiesta, it was the space where a large crowd might gather. Like the Italian piazza and the Portuguese praça, the plaza remains a center of community life that is only equaled by the market-place. A ''plaza de toros'' is a bullring. Shopping centers may incorporate "plaza" into their names, and plaza comercial is used in some countries as a synonym for "centro comercial" i.e. "shopping center". ''Plaza'' (European ; or, Latin American ) is a Spanish word, cognate to Italian ''piazza'' and French ''place'' (which has also been borrowed into English). The origin of all these words is, via Latin ''platea'', from Greek ''plateia (hodos)'', meaning "broad (way or street)".

In the United Kingdom, and especially in London and Edinburgh, a "square" has a wider meaning. There are public squares of the type described above but the term is also used for formal open spaces surrounded by houses with private gardens at the centre, sometimes known as garden squares. Most of these were built in the 18th and 19th centuries. In some cases the gardens are now open to the public. See the Squares in London category. Additionally, many public squares were created in towns and cities across the UK as part of urban redevelopment following the Blitz. Squares can also be quite small and resemble courtyards, especially in the City of London. In London the most impressive example which does not incorporate gardens and which is surrounded by historic buildings is probably Trafalgar Square. In Halifax, the recently restored Piece Hall has been described as a piazza rivalling many in Europe.

In some cities, especially in New England, the term "square" (as its Spanish equivalent, ''plaza'') is applied to a commercial area (like Central Square in Cambridge, Massachusetts), usually formed around the intersection of three or more streets, and which originally consisted of some open area (many of which have been filled in with traffic islands and other traffic calming features). Many of these intersections are irregular rather than square. In U.S. English, a plaza can mean one of several things: * a town square, as in the Spanish usage * "any open area usually located near urban buildings and often featuring walkways, trees and shrubs, places to sit, and sometimes shops" * a shopping center of any size * a toll plaza, where traffic must temporarily stop to pay tolls * an area adjacent to an expressway which has service facilities (such as restaurants, gas station, and restrooms) Today's metropolitan landscapes often incorporate the plaza as a design element, or as an outcome of zoning regulations, building budgetary constraints, and the like. Sociologist William H. Whyte conducted an extensive study of plazas in New York City: his study humanized the way modern urban plazas are conceptualized, and helped usher in significant design changes in the making of plazas., they can be used to open spaces for low income neighborhoods, and can also the overall aesthetic of the surrounding area boosting economic vitality, pedestrian mobility and safety for pedestrians. Most plazas are created out of a collaboration between local non-profit applicants and city officials which requires approval from the city. Throughout North America, words like ''place'', ''square'', or ''plaza'' frequently appear in the names of commercial developments such shopping centers and hotels.


Pitlane Magazine.com: "The Hidden Origin of the Town Square"