The National Broadcasting Company (NBC) is an American English-language commercial terrestrial radio and television network owned by NBCUniversal, a subsidiary of Comcast. The network is headquartered at 30 Rockefeller Plaza in New York City, with additional major offices near Los Angeles (at 10 Universal City Plaza), and Chicago (at the NBC Tower). NBC is one of the Big Three television networks, and is sometimes referred to as the "Peacock Network", in reference to its stylized peacock logo, introduced in 1956 to promote the company's innovations in early color broadcasting; it became the network's official emblem in 1979. Founded in 1926 by the Radio Corporation of America (RCA), NBC is the oldest major broadcast network in the United States. At that time, the parent company of RCA was General Electric (GE). In 1932, GE was forced to sell RCA and NBC as a result of antitrust charges. In 1986, control of NBC passed back to General Electric (GE) through its $6.4 billion purchase of RCA. GE immediately began to liquidate RCA's various divisions, but retained NBC. After the acquisition by GE, Bob Wright became chief executive officer of NBC; he would remain in that position until his retirement in 2007, when he was succeeded by Jeff Zucker. In 2003, French media company Vivendi merged its entertainment assets with GE, forming NBC Universal. Comcast purchased a controlling interest in the company in 2011, and acquired General Electric's remaining stake in 2013. Following the Comcast merger, Zucker left NBCUniversal and was replaced as CEO by Comcast executive Steve Burke. NBC has thirteen owned-and-operated stations and nearly 200 affiliates throughout the United States and its territories, some of which are also available in Canada and/or Mexico via pay-television providers or in border areas over-the-air; NBC also maintains brand licensing agreements for international channels in South Korea and Germany.

During a period of early broadcast business consolidation, radio manufacturer Radio Corporation of America (RCA) acquired New York City radio station WEAF from American Telephone & Telegraph (AT&T). Westinghouse, a shareholder in RCA, had a competing outlet in Newark pioneer station WJZ (no relation to the radio and television station in Baltimore currently using those call letters), which also served as the flagship for a loosely structured network. This station was transferred from Westinghouse to RCA in 1923, and moved to New York City. WEAF acted as a laboratory for AT&T's manufacturing and supply outlet Western Electric, whose products included transmitters and antennas. The Bell System, AT&T's telephone utility, was developing technologies to transmit voice- and music-grade audio over short and long distances, using both wireless and wired methods. The creation of WEAF in 1922 offered a research-and-development center for those activities. WEAF maintained a regular schedule of radio programs, including some of the first commercially sponsored programs, and was an immediate success. In an early example of "chain" or "networking" broadcasting, the station linked with Outlet Company-owned WJAR in Providence, Rhode Island; and with AT&T's station in Washington, D.C., WCAP. New parent RCA saw an advantage in sharing programming, and after getting a license for radio station WRC in Washington, D.C., in 1923, attempted to transmit audio between cities via low-quality telegraph lines. AT&T refused outside companies access to its high-quality phone lines. The early effort fared poorly, since the uninsulated telegraph lines were susceptible to atmospheric and other electrical interference. In 1925, AT&T decided that WEAF and its embryonic network were incompatible with the company's primary goal of providing a telephone service. AT&T offered to sell the station to RCA in a deal that included the right to lease AT&T's phone lines for network transmission.

RCA spent $1 million to purchase WEAF and Washington sister station WCAP, shutting down the latter station, and merged its facilities with surviving station WRC; in late 1926, it subsequently announced the creation of a new division known as the National Broadcasting Company. The division's ownership was split among RCA (a majority partner at 50%), its founding corporate parent General Electric (which owned 30%) and Westinghouse (which owned the remaining 20%). NBC officially started broadcasting on November 15, 1926. WEAF and WJZ, the flagships of the two earlier networks, were operated side by side for about a year as part of the new NBC. On January 1, 1927, NBC formally divided their respective marketing strategies: the "Red Network" offered commercially sponsored entertainment and music programming; the "Blue Network" mostly carried sustaining – or non-sponsored – broadcasts, especially news and cultural programs. Various histories of NBC suggest the color designations for the two networks came from the color of the pushpins NBC engineers used to designate affiliate stations of WEAF (red) and WJZ (blue), or from the use of double-ended red and blue colored pencils. 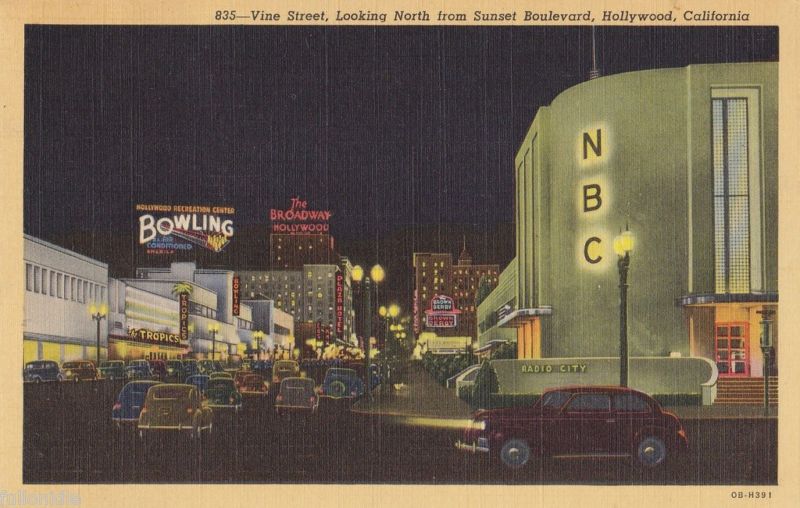 On April 5, 1927, NBC expanded to the West Coast with the launch of the NBC Orange Network, also known as the Pacific Coast Network. This was followed by the debut of the NBC Gold Network, also known as the Pacific Gold Network, on October 18, 1931. The Orange Network carried Red Network programming, and the Gold Network carried programming from the Blue Network. Initially, the Orange Network recreated Eastern Red Network programming for West Coast stations at KPO in San Francisco. In 1936, the Orange Network affiliate stations became part of the Red Network, and at the same time, the Gold Network became part of the Blue Network. In the 1930s, NBC also developed a network for shortwave radio stations, called the NBC White Network. In 1927, NBC moved its operations to 711 Fifth Avenue in Manhattan, occupying the upper floors of a building designed by architect Floyd Brown. NBC outgrew the Fifth Avenue facilities in 1933. In 1930, General Electric was charged with antitrust violations, resulting in the company's decision to divest itself of RCA. The newly separate company signed leases to move its corporate headquarters into the new Rockefeller Center in 1931. John D. Rockefeller, Jr., founder and financier of Rockefeller Center, arranged the deal with GE chairman Owen D. Young and RCA president David Sarnoff. When it moved into the complex in 1933, RCA became the lead tenant at 30 Rockefeller Plaza, known as the "RCA Building" (later the GE Building, now the Comcast Building), which housed NBC's production studios as well as theaters for RCA-owned RKO Pictures.

The iconic three-note NBC chimes came about after several years of development. The three-note sequence, G-E'-C', was first heard over Red Network affiliate WSB in Atlanta, with a second inversion C-major triad as its outline. An executive at NBC's New York headquarters heard the WSB version of the notes during the networked broadcast of a Georgia Tech football game and asked permission to use it on the national network. NBC started to use the chimes sequence in 1931, and it eventually became the first audio trademark to be accepted by the U.S. Patent and Trademark Office. A variant sequence with an additional note, G-E'-C'-G, known as "the fourth chime", was used during significant events of extreme urgency (including during World War II, especially in the wake of the December 1941 attack on Pearl Harbor; on D-Day and during disasters). The NBC chimes were mechanized in 1932 by Rangertone founder Richard H. Ranger; their purpose was to send a low-level signal of constant amplitude that would be heard by the various switching stations manned by NBC and AT&T engineers, and to be used as a system cue for switching individual stations between the Red and Blue network feeds. Contrary to popular legend, the G-E'-C' notes were not originally intended to reference to the General Electric Company (an early shareholder in NBC's founding parent RCA and whose Schenectady, New York radio station, WGY, was an early affiliate of NBC Red). The three-note sequence remains in use by the NBC television network, most notably incorporated into the John Williams-composed theme music used by NBC News, "The Mission" (first composed in 1985 for ''NBC Nightly News'').

In 1934, the Mutual Broadcasting System filed a complaint to the Federal Communications Commission (FCC), following the government agency's creation, claiming it ran into difficulties trying to establish new radio stations in a market largely controlled by NBC and the Columbia Broadcasting System (CBS). In 1938, the FCC began a series of investigations into the monopolistic effects of network broadcasting. A report published by the commission in 1939 found that NBC's two networks and its owned-and-operated stations dominated audiences, affiliates and advertising in American radio; this led the commission to file an order to RCA to divest itself of either NBC Red or NBC Blue. After Mutual's appeals were rejected by the FCC, RCA filed its own appeal to overturn the divestiture order. However, in 1941, the company decided to sell NBC Blue in the event its appeal was denied. The Blue Network was formally named NBC Blue Network, Inc. and NBC Red became NBC Red Network, Inc. for corporate purposes. Both networks formally divorced their operations on January 8, 1942, with the Blue Network being referred to on-air as either "Blue" or "Blue Network", and Blue Network Company, Inc. serving as its official corporate name. NBC Red, meanwhile, became known on-air as simply "NBC". Investment firm Dillon, Read & Co. placed a $7.5 million bid for NBC Blue, an offer that was rejected by NBC executive Mark Woods and RCA president David Sarnoff. After losing on final appeal before the U.S. Supreme Court in May 1943, RCA sold Blue Network Company, Inc., for $8 million to the American Broadcasting System, a recently founded company owned by Life Savers magnate Edward J. Noble. After the sale was completed on October 12, 1943, Noble acquired the rights to the Blue Network name, leases on landlines, the New York studios, two-and-a-half radio stations (WJZ in Newark/New York City; KGO in San Francisco and WENR in Chicago, which shared a frequency with Prairie Farmer station WLS); contracts with actors; and agreements with around 60 affiliates. In turn, to comply with FCC radio station ownership limits of the time, Noble sold off his existing New York City radio station WMCA. Noble, who wanted a better name for the network, acquired the branding rights to the "American Broadcasting Company" name from George B. Storer in 1944. The Blue Network became ABC officially on June 15, 1945, after the sale was completed.