Manatee County is a list of counties in Florida, county in the U.S. state of Florida. As of the 2010 United States Census, 2010 US Census, the population was 322,833. Manatee County is part of the North Port, Florida, North Port-Sarasota, Florida, Sarasota-Bradenton, Florida, Bradenton Sarasota metropolitan area, Metropolitan Statistical Area. Its county seat and largest city is Bradenton, Florida, Bradenton. The county was created in 1855 and named for the Florida manatee, Florida's official marine mammal. Features of Manatee County include access to the southern part of the Tampa Bay estuary, the Sunshine Skyway Bridge, and the Manatee River. Manatee County ranks 15th among Florida counties in population.

The area now known as Manatee County had been inhabited by Native Americans for thousands of years.

The southern mouth of the Manatee River was likely the landing site of the Hernando de Soto (explorer)#1539 to early 1540 in Florida, De Soto Expedition and is the location of the U.S. National Park Service's De Soto National Memorial. 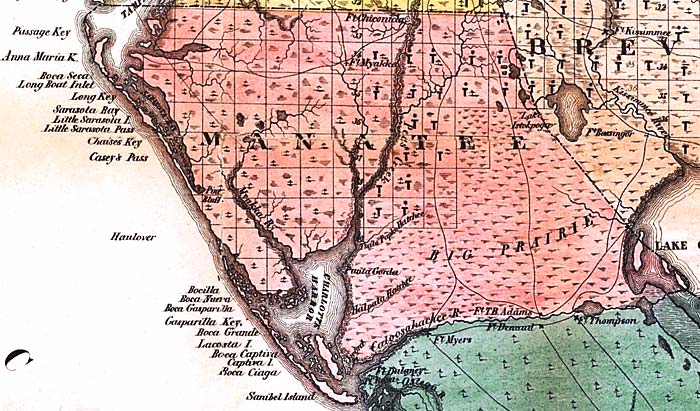 The area was opened to settlement in 1842. The first two settlers were Joseph Braden and Hector Braden who moved into an area near the Manatee River. The two had lost their land for their plantations in Northern Florida during the Panic of 1837. They were said to have heard that there was abundant land in the area. The brothers moved into a log cabin 5 miles north of the mouth of the Manatee River. Four years later Hector had drowned while trying to cross the Manatee River on his horse during a hurricane. Despite this tragic event, Joseph decided he would still build his sugar plantation, the Braden sugar mill at the mouth of the Manatee River and the Braden River. He later built a dock where Main Street was and fortified the area near his house building a stockade. A few years later in 1851, he would build the Braden Castle, which was made out of tabby and served as his residence. It would later become a popular tourist attraction in the early 1900s with Tin Can Tourists. He would only stay there for the next six years before moving to Tallahassee, Florida, Tallahassee. Manatee County had the Gamble Plantation Historic State Park, Gamble Plantation, a sugar plantation that was one of the South's finest. When Manatee County was created in 1855, it included all of what are now Charlotte County, Florida, Charlotte County, DeSoto County, Florida, DeSoto County, Glades County, Florida, Glades County, Hardee County, Florida, Hardee County, Highlands County, Florida, Highlands County, Sarasota County, Florida, Sarasota County and part of Lee County, Florida, Lee County

According to the U.S. Census Bureau, the county has a total area of , of which is land and (%) is water.

Bealls (Florida), Bealls of Florida has its headquarters and was founded 1915 in unincorporated area, unincorporated Manatee County. Tropicana was founded here in the 1950s. They were later bought by PepsiCo but continue to produce products there today.

The Manatee County Public Library System offers a collection of adult, young adult, and children's materials, as well as a genealogy section and the Eaton Florida History Reading Room. Public computers for all to use are available at all library locations. The library's online resources include licensing to OverDrive, Inc., Hoopla (digital media service), and Freegal Music. The library also hosts an online digital collection featuring historic images and documents from Manatee County during the late nineteenth century to the early 1980

Library cards are free to those who reside, own property, attend school, and/or work in Manatee County. Non-residents may obtain a temporary card upon payment of a $20.00 annual fee.

Manatee County's first public library was a privately owned rental library created by Julia Fuller at the Mrs. Bass Dry Goods store in 1898. The county's first independent library opened in Bradenton in 1907, followed a Carnegie Library in Palmetto in 1914 and another in Bradenton in 1918. For much of the 20th century, both cities' libraries were free to city residents while county residents had to pay a non-resident fee. In 1964, Bradenton's and Palmetto's library associations merged with the Manatee County government to create the Manatee County Public Library System. This was followed by the establishment of a bookmobile for rural areas in 1964 and a Talking Books program for the blind in 1966. As demands on the bookmobile grew and the library collection outstripped the existing buildings in Bradenton and Palmetto, the first branch of the Manatee County Public Library system was built in Bayshore in 1967, followed by a new branch on East Ninth Street in 1969 and an Island branch in 1971, the last of which later moved into a new building in 1983. A new building for the Palmetto Library was built in 1969, followed by the modern Central Public Library in downtown Bradenton in 1978. The 1990s saw a period of rapid growth in Manatee County, and the library system grew accordingly, with the Braden River, Rocky Bluff, and South Manatee branches opening in 1991, 1994, and 1998, respectively. The Braden River branch moved to a new building in 1997, bringing the Manatee County Library System to its modern state.

Manatee County Board of County Commissioners

The Board of Commissioners include the following: