The ''Los Angeles Times'' (sometimes abbreviated as ''LA Times'') is a daily newspaper based in El Segundo, California, which has been published in Los Angeles, California, since 1881. It has the fifth-largest circulation in the U.S., and is the largest American newspaper not headquartered on the East Coast. The paper focuses its coverage of issues particularly salient to the West Coast, such as immigration trends and natural disasters. It has won more than 40 Pulitzer Prizes for its coverage of these and other issues. , ownership of the paper is controlled by Patrick Soon-Shiong, and the executive editor is Norman Pearlstine. In the 19th century, the paper developed a reputation for civic boosterism and opposition to labor unions, the latter of which led to the bombing of its headquarters in 1910. The paper's profile grew substantially in the 1960s under publisher Otis Chandler, who adopted a more national focus. In recent decades the paper's readership has declined, and it has been beset by a series of ownership changes, staff reductions, and other controversies. In January 2018, the paper's staff voted to unionize and finalized their first union contract on October 16, 2019. The paper moved out of its historic downtown headquarters to a facility in El Segundo, California near Los Angeles International Airport in July 2018.

The ''Times'' was first published on December 4, 1881, as the ''Los Angeles Daily Times'' under the direction of Nathan Cole Jr. and Thomas Gardiner. It was first printed at the Mirror printing plant, owned by Jesse Yarnell and T.J. Caystile. Unable to pay the printing bill, Cole and Gardiner turned the paper over to the Mirror Company. In the meantime, S. J. Mathes had joined the firm, and it was at his insistence that the ''Times'' continued publication. In July 1882, Harrison Gray Otis moved from Santa Barbara to become the paper's editor. Otis made the ''Times'' a financial success. Historian Kevin Starr wrote that Otis was a businessman "capable of manipulating the entire apparatus of politics and public opinion for his own enrichment". Otis's editorial policy was based on civic boosterism, extolling the virtues of Los Angeles and promoting its growth. Toward those ends, the paper supported efforts to expand the city's water supply by acquiring the rights to the water supply of the distant Owens Valley. 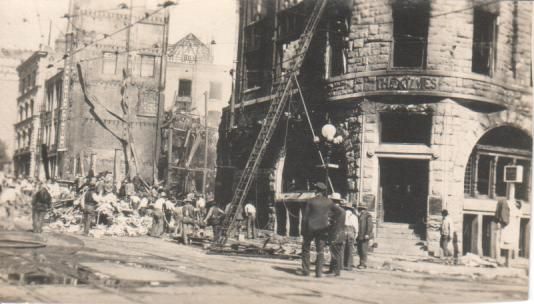 The efforts of the ''Times'' to fight local unions led to the bombing of its headquarters on October 1, 1910, killing twenty-one people. Two union leaders, James and Joseph McNamara, were charged. The American Federation of Labor hired noted trial attorney Clarence Darrow to represent the brothers, who eventually pleaded guilty. Otis fastened a bronze eagle on top of a high frieze of the new ''Times'' headquarters building designed by Gordon Kaufmann, proclaiming anew the credo written by his wife, Eliza: "Stand Fast, Stand Firm, Stand Sure, Stand True".

After Otis's death in 1917, his son-in-law, Harry Chandler, took control as publisher of the ''Times''. Harry Chandler was succeeded in 1944 by his son, Norman Chandler, who ran the paper during the rapid growth of post-war Los Angeles. Norman's wife, Dorothy Buffum Chandler, became active in civic affairs and led the effort to build the Los Angeles Music Center, whose main concert hall was named the Dorothy Chandler Pavilion in her honor. Family members are buried at the Hollywood Forever Cemetery near Paramount Studios. The site also includes a memorial to the Times Building bombing victims. In 1935, the newspaper moved to a new, landmark Art Deco building, the Los Angeles Times Building, to which the newspaper would add other facilities until taking up the entire city block between Spring, Broadway, First and Second streets, which came to be known as Times Mirror Square and would house the paper until 2018. Harry Chandler, then the president and general manager of Times-Mirror Co., declared the Los Angeles Times Building a "monument to the progress of our city and Southern California". The fourth generation of family publishers, Otis Chandler, held that position from 1960 to 1980. Otis Chandler sought legitimacy and recognition for his family's paper, often forgotten in the power centers of the Northeastern United States due to its geographic and cultural distance. He sought to remake the paper in the model of the nation's most respected newspapers, such as ''The New York Times'' and ''The Washington Post''. Believing that the newsroom was "the heartbeat of the business", Otis Chandler increased the size and pay of the reporting staff and expanded its national and international reporting. In 1962, the paper joined with ''The Washington Post'' to form the Los Angeles Times–Washington Post News Service to syndicate articles from both papers for other news organizations. He also toned down the unyielding conservatism that had characterized the paper over the years, adopting a much more centrist editorial stance. During the 1960s, the paper won four Pulitzer Prizes, more than its previous nine decades combined. Writing in 2013 about the pattern of newspaper ownership by founding families, ''Times'' reporter Michael Hiltzik said that:

The first generations bought or founded their local paper for profits and also social and political influence (which often brought more profits). Their children enjoyed both profits and influence, but as the families grew larger, the later generations found that only one or two branches got the power, and everyone else got a share of the money. Eventually the coupon-clipping branches realized that they could make more money investing in something other than newspapers. Under their pressure the companies went public, or split apart, or disappeared. That's the pattern followed over more than a century by the ''Los Angeles Times'' under the Chandler family.

The paper's early history and subsequent transformation was chronicled in an unauthorized history, ''Thinking Big'' (1977, ), and was one of four organizations profiled by David Halberstam in ''The Powers That Be'' (1979, ; 2000 reprint ). It has also been the whole or partial subject of nearly thirty dissertations in communications or social science in the past four decades.