Joseph Eugene Stiglitz (; born February 9, 1943) is an American economist, public policy analyst, and a professor at Columbia University. He is a recipient of the Nobel Memorial Prize in Economic Sciences (2001) and the John Bates Clark Medal (1979). He is a former senior vice president and chief economist of the World Bank and is a former member and chairman of the (US president's) Council of Economic Advisers. He is known for his support of Georgist public finance theory and for his critical view of the management of globalization, of ''laissez-faire'' economists (whom he calls "free-market fundamentalists"), and of international institutions such as the International Monetary Fund and the World Bank. In 2000, Stiglitz founded the Initiative for Policy Dialogue (IPD), a think tank on international development based at Columbia University. He has been a member of the Columbia faculty since 2001, and received that university's highest academic rank (university professor) in 2003. He was the founding chair of the university's Committee on Global Thought. He also chairs the University of Manchester's Brooks World Poverty Institute. He is a member of the Pontifical Academy of Social Sciences. In 2009, the President of the United Nations General Assembly Miguel d'Escoto Brockmann, appointed Stiglitz as the chairman of the U.N. Commission on Reforms of the International Monetary and Financial System, where he oversaw suggested proposals and commissioned a report on reforming the international monetary and financial system. He served as chair of the international Commission on the Measurement of Economic Performance and Social Progress, appointed by President Sarkozy of France, which issued its report in 2010, ''Mismeasuring our Lives: Why GDP doesn't add up,'' and currently serves as co-chair of its successor, the High Level Expert Group on the Measurement of Economic Performance and Social Progress. From 2011 to 2014, Stiglitz was president of the International Economic Association (IEA). He presided over the organization of the IEA triennial world congress held near the Dead Sea in Jordan in June 2014. Stiglitz has received more than 40 honorary degrees, including from Cambridge and Harvard, and he has been decorated by several governments including Bolivia, South Korea, Colombia, Ecuador, and most recently France, where he was appointed a member of the Legion of Honor, order Officer. In 2011 Stiglitz was named by ''Time'' magazine as one of the 100 most influential people in the world. Stiglitz's work focuses on income distribution from a Georgist perspective, asset risk management, corporate governance, and international trade. He is the author of several books, the latest being ''People, Power, and Profits'' (2019), ''The Euro: How a Common Currency Threatens the Future of Europe'' (2016), ''The Great Divide: Unequal Societies and What We Can Do About Them'' (2015), ''Rewriting the Rules of the American Economy: An Agenda for Growth and Shared Prosperity'' (2015), and ''Creating a Learning Society: A New Approach to Growth Development and Social Progress'' (2014). He is also one of the 25 leading figures on the Information and Democracy Commission launched by Reporters Without Borders. According to the Open Syllabus Project, Stiglitz is the fifth most frequently cited author on college syllabi for economics courses.

Stiglitz was born in Gary, Indiana, to a Jewish family. His mother was Charlotte (née Fishman), a schoolteacher, and his father was Nathaniel David Stiglitz, an insurance salesman. Stiglitz attended Amherst College, where he was a National Merit Scholar, active on the debate team, and president of the student government. During his senior year at Amherst College, he studied at the Massachusetts Institute of Technology (MIT), where he later pursued graduate work. In Summer 1965, he moved to the University of Chicago to do research under Hirofumi Uzawa who had received an NSF grant. He studied for his PhD from MIT from 1966 to 1967, during which time he also held an MIT assistant professorship. Stiglitz stated that the particular style of MIT economics suited him well, describing it as "simple and concrete models, directed at answering important and relevant questions." From 1966 to 1970 he was a research fellow at the University of Cambridge. Stiglitz initially arrived at Fitzwilliam College, Cambridge as a Fulbright Scholar in 1965, and he later won a Tapp Junior Research Fellowship at Gonville and Caius College, Cambridge which was instrumental in shaping his understanding of Keynes and macroeconomic theory. In subsequent years, he held academic positions at Yale, Stanford, and Princeton. Since 2001, Stiglitz has been a professor at Columbia University, with appointments at the Business School, the Department of Economics and the School of International and Public Affairs (SIPA), and is editor of ''The Economists' Voice'' journal with J. Bradford DeLong and Aaron Edlin. He also gives classes for a double-degree program between Sciences Po Paris and École Polytechnique in 'Economics and Public Policy'. He has chaired The Brooks World Poverty Institute at the University of Manchester since 2005. Stiglitz is widely considered a New-Keynesian economist, although at least one economics journalist says his work cannot be so clearly categorised. Stiglitz has played a number of policy roles throughout his career. He served in the Clinton administration as the chair of the President's Council of Economic Advisers (1995–1997). At the World Bank, he served as senior vice-president and chief economist from 1997 to 2000. He was fired by the World Bank for expressing dissent with its policies. Stiglitz has advised American president Barack Obama, but has criticized the Obama Administration's financial-industry rescue plan. He said whoever designed the Obama administration's bank rescue plan is "either in the pocket of the banks or they're incompetent." In October 2008, he was asked by the President of the United Nations General Assembly to chair a commission drafting a report on the reasons for and solutions to the financial crisis. In response, the commission produced the Stiglitz Report. On July 25, 2011, Stiglitz participated in the "I Foro Social del 15M" organized in Madrid, expressing his support to 15M Movement protestors. Stiglitz was the president of the International Economic Association from 2011 to 2014. On September 27, 2015, the United Kingdom Labour Party announced that Stiglitz was to sit on its Economic Advisory Committee along with five other world leading economists. 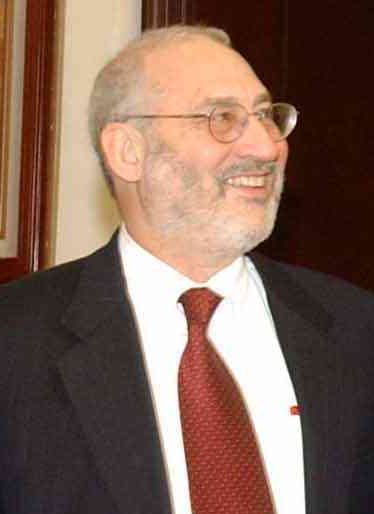 After the 2018 mid-term elections in the United States he wrote a statement about the importance of economic justice to the survival of democracy worldwide.

After getting his PhD from M.I.T. in 1967, Stiglitz co-authored one of his first papers with Michael Rothschild for the Journal of Economic Theory in 1970. Stiglitz and Rothschild built upon works by economists such as Robert Solow on the concept of risk aversion. Stiglitz and Rothschild showed three plausible definitions of a variable X being 'more variable' than a variable Y were all equivalent - Y being equal to X plus noise, every risk averse agent preferring Y to X, and Y having more weight in its tails, and that none of these were always consistent with X having a higher statistical variance than Y - a commonly used definition at the time. In a second paper, they analyzed the theoretical consequences of risk aversion in various circumstances, such as an individual's savings decisions and a firm's production decisions.

Stiglitz made early contributions to a theory of public finance stating that an optimal supply of local public goods can be funded entirely through capture of the land rents generated by those goods (when population distributions are optimal). Stiglitz dubbed this the 'Henry George theorem' in reference to the radical classical economist Henry George who famously advocated for land value tax. The explanation behind Stiglitz's finding is that rivalry for public goods takes place geographically, so competition for access to any beneficial public good will increase land values by at least as much as its outlay cost. Furthermore, Stiglitz shows that a single tax on rents is necessary to provide the optimal supply of local public investment. Stiglitz also shows how the theorem could be used to find the optimal size of a city or firm.

Stiglitz's most famous research was on screening, a technique used by one economic agent to extract otherwise private information from another. It was for this contribution to the theory of information asymmetry that he shared the Nobel Memorial Prize in Economics in 2001 "for laying the foundations for the theory of markets with asymmetric information" with George A. Akerlof and A. Michael Spence. Much of Stiglitz's work on information economics demonstrates situations in which incomplete information prevents markets from achieving social efficiency. His paper with Andrew Weiss showed that if banks use interest rates to infer information about borrowers' types (adverse selection effect) or to encourage their actions following borrowing (incentive effect), then credit will be rationed below the optimal level, even in a competitive market. Stiglitz and Rothschild showed that in an insurance market, firms have an incentive to undermine a 'pooling equilibrium', where all agents are offered the same full-insurance policy, by offering cheaper partial insurance that would only be attractive to the low-risk types, meaning that a competitive market can only achieve partial coverage of agents. Stiglitz and Grossman showed that trivially small information acquisition costs prevent financial markets from achieving complete informational efficiency, since agents will have an incentive to free-ride on others' information acquisition, and acquire this information indirectly by observing market prices.

Stiglitz, together with Avinash Dixit, created a tractable model of monopolistic competition that was an alternative to traditional perfect-competition models of general equilibrium. They showed that in the presence of increasing returns to scale, the entry of firms is socially too small. The model was extended to show that when consumers have a preference for diversity, entry can be socially too large. The modelling approach was also influential in the fields of trade theory, and industrial organisation, and was used by Paul Krugman in his analysis of non comparative advantage trading patterns.

Stiglitz also did research on efficiency wages, and helped create what became known as the "Shapiro–Stiglitz model" to explain why there is unemployment even in equilibrium, why wages are not bid down sufficiently by job seekers (in the absence of minimum wages) so that everyone who wants a job finds one, and to question whether the neoclassical paradigm could explain involuntary unemployment.