Jack Kent Cooke (October 25, 1912 – April 6, 1997) was a Canadian-American businessman in broadcasting and professional sports. Starting in sales, Cooke was very successful, eventually becoming a partner in a network of radio stations and newspapers in Canada. After failing at starting a major league baseball team in Toronto and being turned down to own a television station in Toronto, Cooke moved to the United States and built a business empire in broadcasting and professional sports franchises. Cooke was the owner of the Washington Redskins (NFL), the Los Angeles Lakers (NBA), the Los Angeles Kings (NHL), the Los Angeles Wolves (United Soccer) and Toronto Maple Leafs (IL). He also developed The Forum in Inglewood, California, and FedExField near Landover, Maryland.

Born in Hamilton, Ontario, Cooke moved with his family to The Beaches area of Toronto in 1921, where he attended Malvern Collegiate Institute. At age 14, Cooke got a job selling encyclopedias door to door. At the end of his first day, he took home over $20 to his mother, and is reported as later saying, "I think that was the proudest moment of my life." He later became a runner on the floor of the Toronto Stock Exchange. He was selling soap in Northern Ontario for Colgate-Palmolive in 1936 when he met Roy Thomson, who hired Cooke to run radio station CJCS in Stratford, Ontario. The two became partners in 1941, buying radio stations and newspapers in Ontario and Quebec.

With the financial backing of J. P. Bickell, Cooke purchased CKCL (under Toronto Broadcasting Co.) in 1945, changing the call letters to CKEY. He also continued to work with Thomson, and the two acquired the Canadian edition of ''Liberty'' magazine in 1948, naming it ''New Liberty''. The following year, Thomson sold his half of the magazine to Cooke. 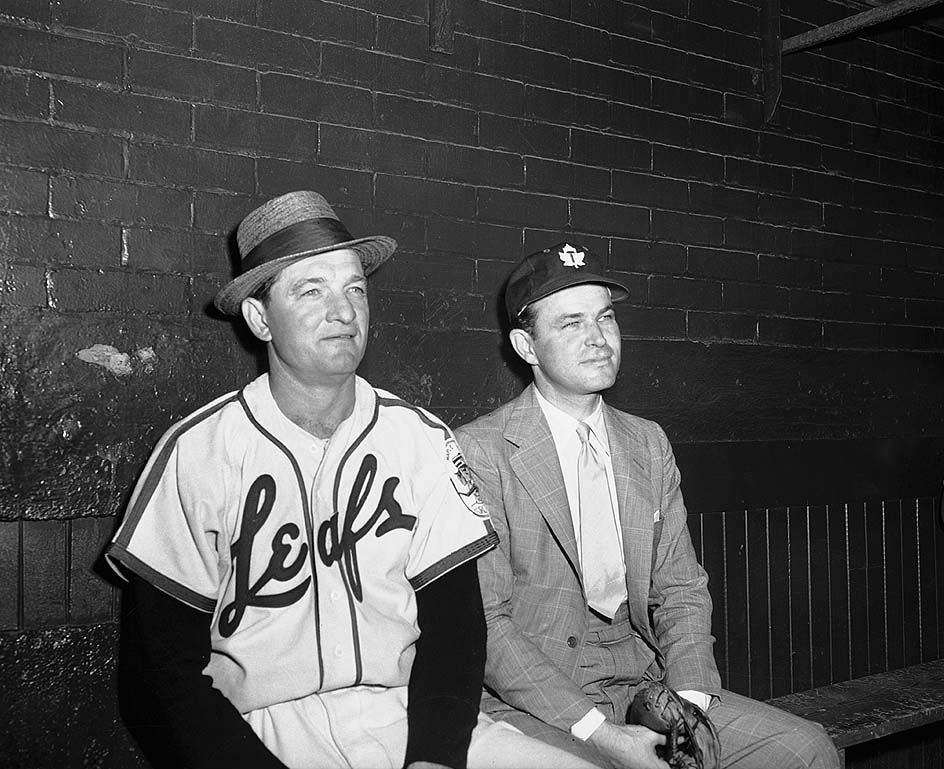 In 1951, Cooke ventured into sports, acquiring the minor league Toronto Maple Leafs baseball club. He transformed the games from straight athletic contests into complete entertainment packages, with a long list of special promotions and celebrity appearances. With his focus on entertainment, Cooke was compared to St. Louis Browns owner Bill Veeck. Five months after becoming owner, Cooke presented a 48-page booklet to all the teams in the league, outlining his promotional strategies. He was named minor league executive of the year by ''The Sporting News'' in 1952. That same year, Cooke purchased Consolidated Press, publisher of ''Saturday Night'' magazine. He made an unsuccessful bid for ''The Globe and Mail'' newspaper in 1955. While owning the Maple Leafs baseball team, Cooke set his sights on bringing Major League Baseball to Toronto. He tried to purchase the St. Louis Browns, Philadelphia Athletics, and Detroit Tigers when they came up for sale, and in 1959 he became one of the founding team owners in the Continental League, a proposed third major league for professional baseball. The league disbanded a year later without ever playing a game. Cooke still hoped to get an American League expansion team in Toronto, but the city's lack of a major league venue became an impasse. Cooke sold the Maple Leafs in 1964. Before that, he had watched several team practices and observed Sparky Anderson, noting the player's leadership qualities and ability to teach younger players from all backgrounds. Cooke encouraged Anderson to pursue a career in managing, offering him the post for the Leafs. In 1964, Anderson accepted the offer. Cooke was inducted into the Canadian Baseball Hall of Fame in 1985. In 1960, Cooke lost a bid to obtain a licence for the first privately-owned TV station in Toronto. There had been nine bids in a highly competitive process, and the licence was awarded to a consortium of Aldred-Rogers Broadcasting and the Telegram Corporation, which launched CFTO-TV.

Move to the United States

Within weeks of being turned down for the Toronto TV license, Cooke applied for U.S. citizenship. With the support of Francis E. Walter, Cooke quickly became a citizen when both houses of Congress and President Dwight D. Eisenhower approved a waiver of the usual five-year waiting period. He sold CKEY at the end of 1960, and Consolidated Press in 1961. At the time, Canada and the U.S. both had laws prohibiting foreign control of radio and TV stations. Cooke had entered the U.S. broadcasting industry in August 1959 by acquiring Pasadena, California radio station KRLA 1110 (now KRDC) through his brother, Donald Cooke, a U.S. citizen. Cooke formed American Cablevision in the 1960s and acquired several cable television companies. He acquired majority ownership of TelePrompTer cable TV, and sold it in the late 1970s for $646 million. In 1979, he bought the Chrysler Building in New York City, one of the world's most renowned skyscrapers. In 1985, Cooke bought the ''Los Angeles Daily News'' for $176 million. A year later, he acquired another cable TV company. He sold the cable systems in 1989.

In 1961, Cooke purchased a 25% interest in the Washington Redskins after team owner and founder George Preston Marshall became incapacitated by a stroke, becoming majority owner in 1974 and sole owner in 1985. While he was owner of the Redskins, the team won three Super Bowls under head coach Joe Gibbs (in 1982, 1987, and 1991), the franchise's first championships since the 1940s. In 1997, Cooke completed a stadium deal near Landover, Maryland, for a new home for his team. This community was named Raljon—a name devised by Cooke by combining the names of his sons Ralph and John. Shortly afterward, he died of cardiac arrest. The stadium was posthumously named Jack Kent Cooke Stadium, which was changed under subsequent ownership to FedExField in 1999 (the Raljon name was discontinued at the same time). In his will, Cooke left the team and stadium to his foundation with instructions to sell it. Cooke's son, John Kent Cooke, tried to put in a competitive bid to keep the team in the family, but it instead went to local businessman Daniel Snyder and his associates for a record-setting $800 million.

In September 1965, Cooke purchased the Los Angeles Lakers for $5 million ($ in current dollar terms) from Bob Short. Under Cooke's ownership the Lakers moved from the Los Angeles Memorial Sports Arena to The Forum and changed their colors from Royal and Light Blue to the current Purple (which he referred to as "Forum Blue") and Gold. The Lakers during Cooke's ownership reached seven NBA Finals and won the 1972 NBA Finals.

As a Canadian, Cooke particularly enjoyed ice hockey, and he was determined to bring the National Hockey League (NHL) to Los Angeles. In 1966, the NHL announced it intended to sell six new franchises, and Cooke prepared a bid. The Los Angeles Memorial Coliseum Commission, which operated the Sports Arena, supported a competing bid headed by Los Angeles Rams owner Dan Reeves, and advised Cooke that if he won the franchise he would not be allowed to use that facility. In response, Cooke threatened to build a new arena in the Los Angeles suburb of Inglewood. Nearly 30 years later Cooke told the ''Los Angeles Times'' sportswriter Steve Springer that he recalled "one official representing the commission laughing at him" (Springer's words) when Cooke warned he would build in Inglewood. Cooke won the franchise, and paid $2 million for the new Los Angeles NHL club, which he called the "Kings." Springer: "Cooke went to Inglewood and built the Forum. Good-bye, Lakers. Good-bye, Kings." The Kings played their first game on October 14, 1967—at the Long Beach Arena, while construction was being completed at Cooke's new arena. Cooke claimed The Forum would be "the most beautiful arena in the world." It opened December 30, 1967, to rave reviews. Cooke was soon calling it "The Fabulous Forum." The Kings struggled both on the ice and at the gate, however. Cooke had been told that there were more than 300,000 former Canadians living within a three-hour drive of Los Angeles, and remarked, "Now I know why they left Canada: They hate hockey!" Cooke sold the Forum, Kings, and Lakers in 1979 to Dr. Jerry Buss for a then-record combined $67.5 million ($ in current dollar terms); part of the compensation included the Chrysler Building.

In 1967, Cooke was a founder of the United Soccer Association and owned the Los Angeles Wolves team, which became a charter NASL team the following year. In 1971, he was a financial backer of the first Muhammad Ali vs Joe Frazier boxing match, held at Madison Square Garden and won by Frazier.

A lover of horses and a fan of Thoroughbred horse racing, Cooke owned Kent Farms, a estate in Middleburg, Virginia, not far from Washington, D.C. In December 1984 he purchased the historic Elmendorf Farm in Lexington, Kentucky from the estate of Maxwell Gluck. He bred and raced a number of successful horses, notably Flying Continental whose wins included the 1990 Jockey Club Gold Cup.

Cooke was married five times; however, two of the five marriages were to the same woman, Marlene Ramallo Chalmers. He was married to Chalmers at the time of his death. Cooke's first marriage, his longest, lasted 45 years. He and Barbara Jean Carnegie married in 1934 and divorced in 1979. In the divorce action, Carnegie was awarded what was then the largest divorce settlement in history — $42 million ($ in current dollar terms). The presiding judge during the bench trial was Joseph Wapner, who later became famous as the judge on television's ''The People's Court''. Cooke and Carnegie had two sons: John Kent Cooke and Ralph Kent Cooke. On October 31, 1980, Cooke married Jeanne Maxwell Williams, a sculptor from Las Vegas.