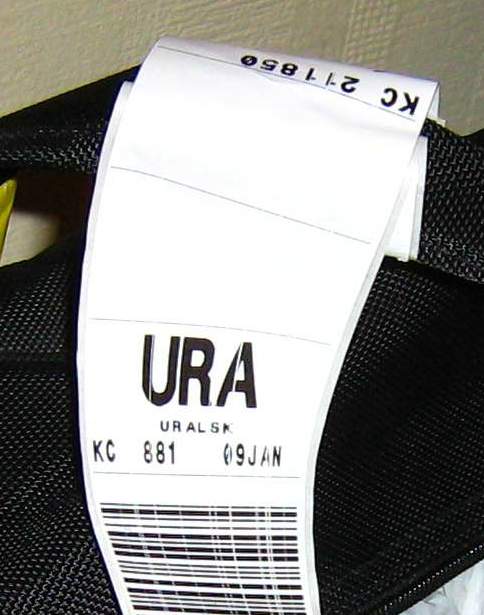 An IATA airport code, also known as an IATA location identifier, IATA station code, or simply a location identifier, is a three-letter geocode designating many airports and metropolitan areas around the world, defined by the International Air Transport Association (IATA). The characters prominently displayed on baggage tags attached at airport check-in desks are an example of a way these codes are used. The assignment of these codes is governed by IATA Resolution 763, and it is administered by the IATA's headquarters in Montreal. The codes are published semi-annually in the IATA Airline Coding Directory. IATA also provides codes for railway stations and for airport handling entities. Alphabetical lists of airports sorted by IATA code are available. A list of railway station codes, shared in agreements between airlines and rail lines such as Amtrak, SNCF French Railways, and Deutsche Bahn, is available. Many railway administrations have their own list of codes for their stations, such as the list of Amtrak station codes.

Airport codes arose out of the convenience that the practice brought pilots for location identification in the 1930s. Initially, pilots in the United States used the two-letter code from the National Weather Service (NWS) for identifying cities. This system became unmanageable for cities and towns without an NWS identifier, and the use of two letters allowed only a few hundred combinations; a three-letter system of airport codes was implemented. This system allowed for 17,576 permutations, assuming all letters can be used in conjunction with each other.

Predominantly, airport codes are named after the first three letters of the city in which it is located—ATL for Atlanta, SIN for Singapore, ASU for Asunción, MEX for Mexico City, DEN for Denver; IST for Istanbul; or a combination of the letters in its name, ALA for Almaty (formerly known as Alma-Ata), ORK for Cork, EWR for Newark, GDL for Guadalajara, JNB for Johannesburg, HKG for Hong Kong, SLC for Salt Lake City and WAW for Warsaw. Some airports in the United States retained their NWS codes and simply appended an X at the end, such as LAX for Los Angeles, PDX for Portland, and PHX for Phoenix. Sometimes the airport code reflects pronunciation, rather than spelling, such as NAN, which reflects the pronunciation of "Nadi" as in Fijian, where "d" is realized as the prenasalized stop . For many reasons, some airport codes do not fit the normal scheme described above. Some airports, for example, cross several municipalities or regions, and therefore, use codes derived from some of their letters, resulting in DFW for Dallas/Fort Worth, DTW for Detroit–Wayne County, LBA for Leeds–Bradford (Airport), MSP for Minneapolis–Saint Paul, and RDU for Raleigh–DUrham. Other airports—particularly those serving cities with multiple airports—have codes derived from the name of the airport itself, such as JFK for New York's John F. Kennedy or CDG for Paris' Charles de Gaulle (see below). In some cases, the code comes from the airport's unofficial name, such as Kahului Airport's OGG (for local aviation pioneer Jimmy Hogg). Canada's unusual codes–which bear little to no similarity with any conventional abbreviation to the city's name–such as YUL in Montréal, and YEG in Edmonton, originated from the two-letter codes used to identify weather reporting stations in the 1930s. The letters preceding the two-letter code follow the following format: * Y (meaning "''yes''") if the reporting station was co-located with an airport. * W (meaning "''without''") if the reporting station was not co-located with an airport. * U if the reporting station was co-located with a non-directional beacon. * X if the last two letters of the code had already been taken by another Canadian airport. * Z if the resulting code had already been taken by a US airport.