Foraminifera (; Latin for "hole bearers"; informally called "forams") are single-celled organisms, members of a phylum or class of amoeboid protists characterized by streaming granular ectoplasm for catching food and other uses; and commonly an external shell (called a "test") of diverse forms and materials. Tests of chitin (found in some simple genera, and Textularia in particular) are believed to be the most primitive type. Most foraminifera are marine, the majority of which live on or within the seafloor sediment (i.e., are benthic), while a smaller number float in the water column at various depths (i.e., are planktonic). Fewer are known from freshwater or brackish conditions, and some very few (nonaquatic) soil species have been identified through molecular analysis of small subunit ribosomal DNA. Foraminifera typically produce a test, or shell, which can have either one or multiple chambers, some becoming quite elaborate in structure. These shells are commonly made of calcium carbonate () or agglutinated sediment particles. Over 50,000 species are recognized, both living (10,000) and fossil (40,000). They are usually less than 1 mm in size, but some are much larger, the largest species reaching up to 20 cm. In modern scientific English, the term ''foraminifera'' is both singular and plural (irrespective of the word's Latin derivation), and is used to describe one or more specimens or taxa: its usage as singular or plural must be determined from context. Foraminifera is frequently used informally to describe the group, and in these cases is generally lowercase.

The earliest known reference to foraminifera comes from Herodotus, who in the 5th century BCE noted them as making up the rock that forms the Great Pyramid of Giza. These are today recognized as representatives of the genus ''Nummulites''. Strabo, in the 1st Century BCE, noted the same foraminifera, and suggested that they were the remains of lentils left by the workers who built the pyramids. Robert Hooke observed a foraminifera under the microscope, as described and illustrated in his 1665 book ''Micrographia:''

I was trying several small and single Magnifying Glasses, and casually viewing a parcel of white Sand, when I perceiv'd one of the grains exactly shap'd and wreath'd like a Shell..I view'd it every way with a better Microscope and found it on both sides, and edge-ways, to resemble the Shell of a small Water-Snail with a flat spiral Shell../blockquote>Antonie van Leeuwenhoek described and illustrated foraminiferal tests in 1700, describing them as minute cockles; his illustration is recognizable as being ''Elphidium''. Early workers classified foraminifera within the genus ''Nautilus'', noting their similarity to certain cephalopods. It was recognised by Lorenz Spengler in 1781 that foraminifera had holes in the septa, which would eventually grant the group its name. Spengler also noted that the septa of foraminifera arced the opposite way from those of nautili and that they lacked a nerve tube. 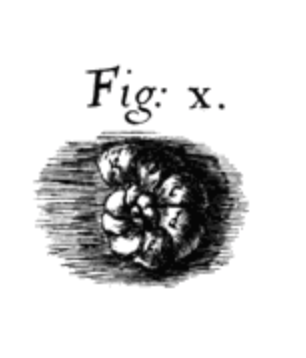 Alcide d'Orbigny, in his 1826 work, considered them to be a group of minute cephalopods and noted their odd morphology, interpreting the pseudopodia as tentacles and noting the highly reduced (in actuality, absent) head. He named the group ''foraminifères'', or "hole-bearers", as members of the group had holes in the divisions between compartments in their shells, in contrast to nautili or ammonites. The protozoan nature of foraminifera was first recognized by Dujardin in 1835. Shortly after, in 1852, d'Orbigny produced a classification scheme, recognising 72 genera of foraminifera, which he classified based on test shape—a scheme that drew severe criticism from colleagues. H.B. Brady's 1884 monograph described the foraminiferal finds of the ''Challenger'' expedition. Brady recognized 10 families with 29 subfamilies, with little regard to stratigraphic range; his taxonomy emphasized the idea that multiple different characters must separate taxonomic groups, and as such placed agglutinated and calcareous genera in close relation. This overall scheme of classification would remain until Cushman's work in the late 1920s. Cushman viewed wall composition as the single most important trait in classification of foraminifera; his classification became widely accepted but also drew criticism from colleagues for being "not biologically sound". Cushman's scheme nevertheless remained the dominant scheme of classification until Tappan and Loeblich's 1964 classification, which placed foraminifera into the general groupings still used today, based on microstructure of the test wall. These groups have been variously moved around according to different schemes of higher-level classification. Pawlowski's (2013) use of molecular systematics has generally confirmed Tappan and Loeblich's groupings, with some being found as polyphyletic or paraphyletic; this work has also helped to identify higher-level relationships among major foraminiferal groups.

The taxonomic position of the Foraminifera has varied since Schultze in 1854, who referred to as an order, Foraminiferida. Loeblich and Tappan (1992) reranked Foraminifera as a class as it is now commonly regarded. The Foraminifera have typically been included in the Protozoa, or in the similar Protoctista or Protist kingdom. Compelling evidence, based primarily on molecular phylogenetics, exists for their belonging to a major group within the Protozoa known as the Rhizaria.