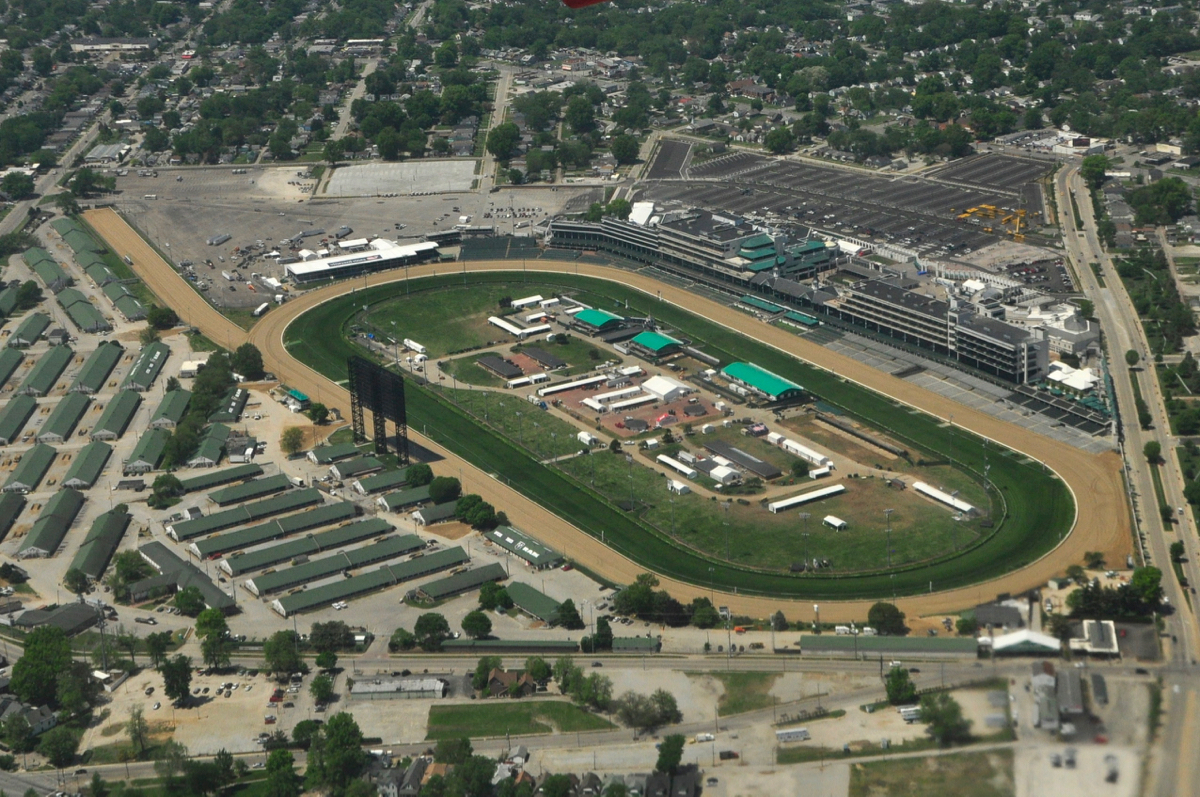 Churchill Downs is a
horse racing Horse racing is an equestrian performance sport, typically involving two or more horses ridden by jockey A jockey is someone who rides horses in horse racing or steeplechase (horse racing), steeplechase racing, primarily as a professio ...
complex located on Central Avenue in south
Louisville, Kentucky Louisville (, , ) is the List of cities in Kentucky, largest city in the Kentucky, Commonwealth of Kentucky and the list of United States cities by population, 29th most-populous city in the United States. Louisville is the historical count ...
,
United States The United States of America (USA), commonly known as the United States (U.S. or US), or America, is a country Contiguous United States, primarily located in North America. It consists of 50 U.S. state, states, a Washington, D.C., federal di ...
, famed for hosting the annual Kentucky Derby. It officially opened in 1875 and was named for Samuel Churchill, whose family was prominent in Kentucky for many years. The first Kentucky Derby, a
Thoroughbred The Thoroughbred is a horse breed A horse breed is a selectively bred population of domestication, domesticated horses, often with Pedigree chart, pedigrees recorded in a breed registry. However, the term is sometimes used in a broader sense ...
sweepstakes and part of today's horse racing Triple Crown, and the first Kentucky Oaks were held in the same year. Churchill Downs has also hosted the renowned Breeders' Cup on nine occasions, most recently on November 2 and 3, 2018. The racetrack is owned and operated by Churchill Downs Incorporated. With the infield open for the Kentucky Derby, the capacity of Churchill Downs is roughly 170,000. In 2009 the Horseplayers Association of North America introduced a rating system for 65 Thoroughbred racetracks in North America, which ranked Churchill Downs number 5 on its list. In 2014, prior to the start of their spring meet, Churchill Downs announced an increase in parimutuel takeout rates. As a result of the takeout increase, Churchill Downs ranked number 22 in that year's Horseplayers Association of North America Track Ratings. 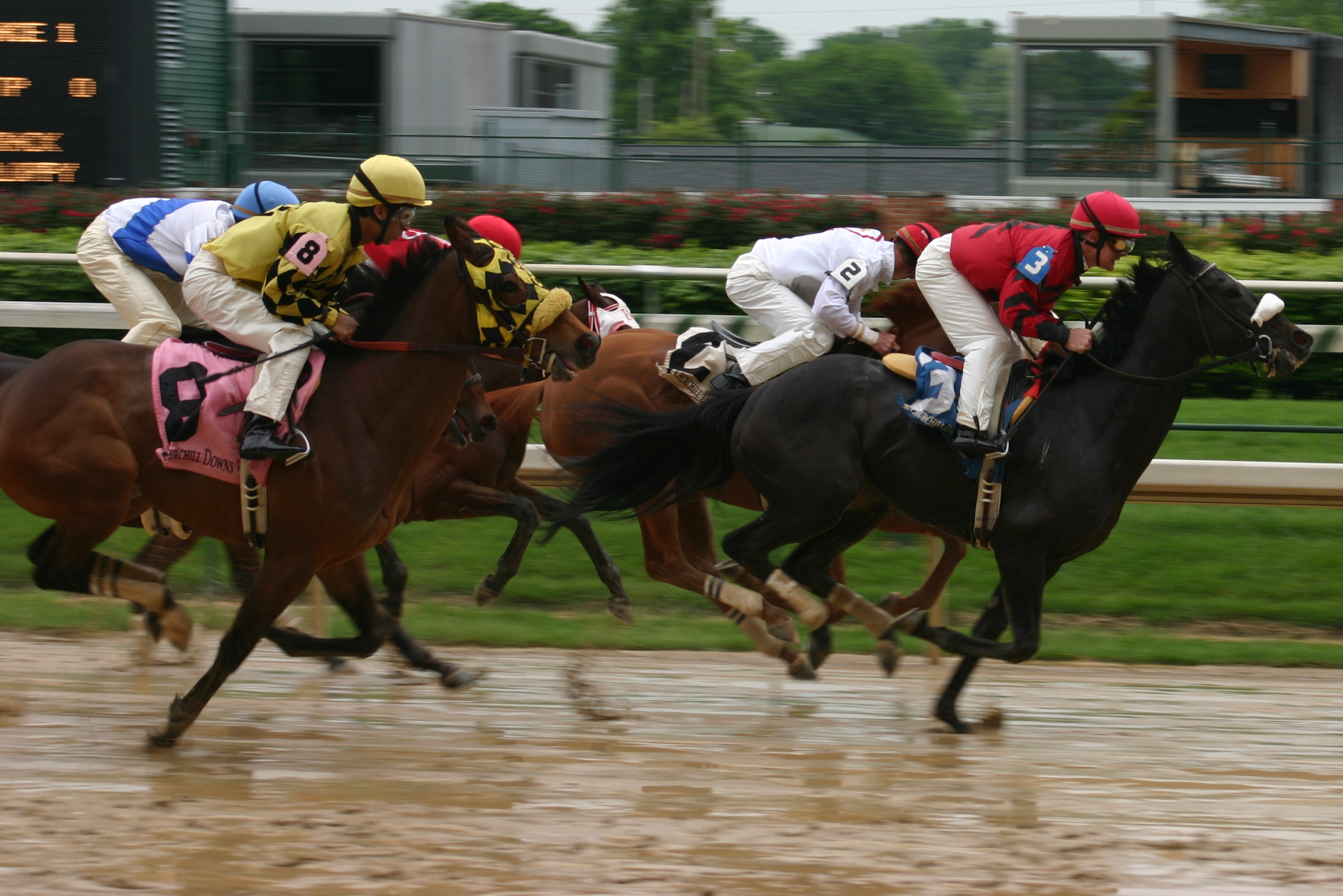 The track is named for John and Henry Churchill, who leased of land to their nephew, Colonel Meriwether Lewis Clark Jr. (grandson of explorer William Clark). Clark was president of the Louisville Jockey Club and Driving Park Association, which formed in 1875. His father-in-law, Richard Ten Broeck, was an accomplished horse breeding, horse breeder and horse trainer, trainer, and introduced Clark to
horse racing Horse racing is an equestrian performance sport, typically involving two or more horses ridden by jockey A jockey is someone who rides horses in horse racing or steeplechase (horse racing), steeplechase racing, primarily as a professio ...
, attending the Epsom Derby, English Derby at Epsom Downs Racecourse, Epsom Downs outside London.

Churchill Downs filled a void in Louisville left by the closing of Oakland and Woodlawn, two earlier race courses. The then-rural location was along Louisville and Nashville Railroad tracks, allowing for easy transport of horses. Clark, who preferred longer races to the relatively short ones that had become popular by the 1890s, was running short of funds, and in 1894 sold the track to a syndicate led by William E. Applegate. The new ownership would soon institute many changes, such as commissioning the famous twin spire grandstand in 1895, shortening the length of the signature race to its modern in 1896, and adorning the winner of the Derby with a garland of roses, a tradition that also began in 1896.

In early 1902, Applegate, who had made his fortune as a bookmaker, turned over the day-to-day operation of the track to Charles F. Grainger, then the List of mayors of Louisville, mayor of Louisville, in an effort to move Churchill Downs away from being primarily known for gambling. Among the new people Applegate brought on board to help him run the rack was Matt Winn, Col. Matt Winn of Louisville. Churchill Downs prospered and the Kentucky Derby then became the preeminent stakes race for three-year-old thoroughbred horses in North America. During that early period, a new clubhouse was built in order to promote social interaction, and new events such as steeplechases, automobile races, and band concerts were held at the track. The Kentucky State Fair, State Fair was held on the grounds, featuring the odd spectacle of two locomotives being intentionally crashed head-on in the infield. 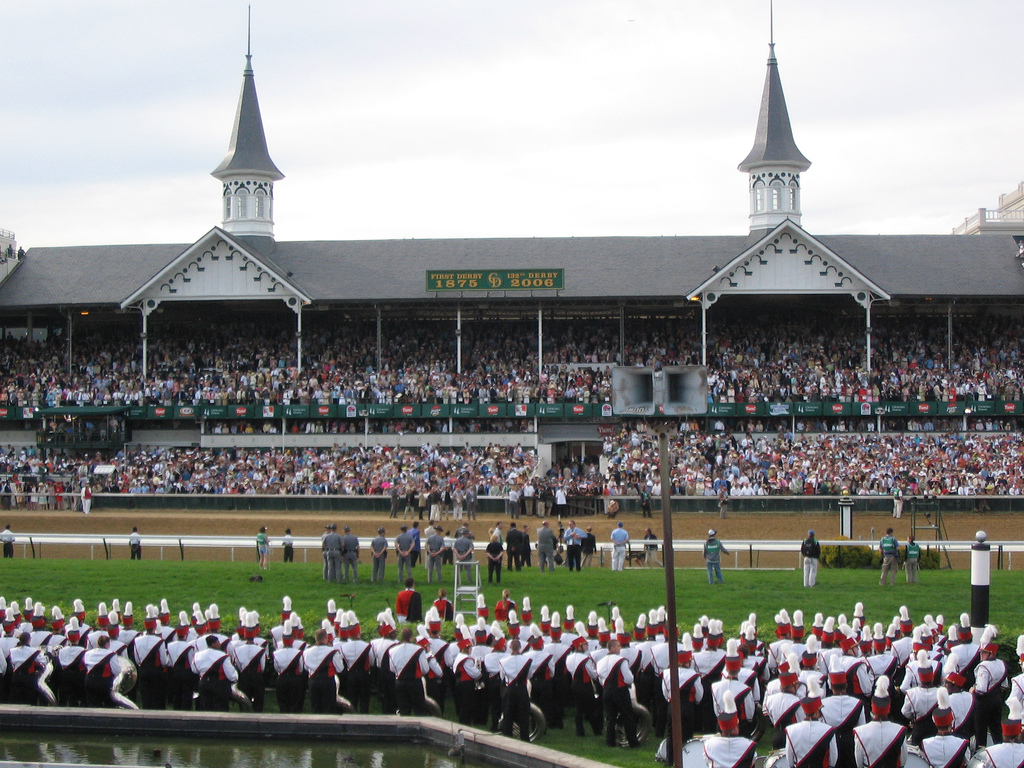 On June 5, 1907, African American jockey James Lee (jockey), James Lee set a record that has never been beaten when he won the entire six-race card at Churchill Downs. In 1908, parimutuel betting machines were introduced as gambling began to be less controversial again, and the wagering portion of the track's business became more profitable. Churchill Downs was designated a National Historic Landmark in 1986. On Friday, June 19, 2009, Churchill Downs hosted its first-ever night race with an attendance of over 27,000. Churchill Downs ventured into the music business, organizing the inaugural HullabaLOU Music Festival, held on the weekend of July 23–25, 2010. The track had planned to make this an annual event to compete with other summer music festivals. HullabaLOU attracted 78,000 people but that fell short of the more than 100,000 expected by the company. The company attributed this to the brutal heat, but others cited high ticket prices in a poor economy. The entertainment division lost more than $5 million int its first year and was discontinued. On Wednesday, June 22, 2011, an Enhanced Fujita Scale, EF2 tornado hit the Louisville area, striking the stables and chapel at Churchill Downs, at EF1 intensity. Several stables were badly damaged, as was the chapel. Over 200 horses had to be evacuated from the damaged stables and be relocated to other stables that were not damaged by the tornado. The tornado did not cause any damage to the twin spires or the clubhouse. ''Thurby'' is a portmanteau for ''Thursday'' plus ''Derby'', and this name for the Thursday racing in Derby week has been recognized by Churchill Downs since 2014.

File:Churchill Downs, spring meet 2014.jpg, Churchill Downs, spring meet 2014 The twin spires atop the grandstands are the most recognizable architectural feature of Churchill Downs and are used as a symbol of the track and the Derby. They were designed by architect Joseph Dominic Baldez and built in 1895. Today, Churchill Downs covers . The usual number of people seated at the derby is 50,000 people, though crowds can reach over 150,000 on Derby day. The dirt oval main track, on which the Derby is run, is one mile (1.6 km) in circumference and is wide, with a section for the starting gate. A turf track, inside the main track, is in circumference and wide. From 2001 to 2005, Churchill Downs underwent a three-and-a-half year, $121 million renovation. The clubhouse was replaced, 79 Luxury box, luxury suites were added, and the historic twin spires were refurbished. One of the additions in the clubhouse was a mural by Pierre Bellocq depicting all 96 jockeys to win the Kentucky Derby from 1875 to 2004. In summer 2008 the same artist added another mural depicting all of the trainers and updating the Jockey's painting, adding Calvin Borel and Edgar Prado to it. These updates are done yearly to accommodate new winning trainers and jockeys. The new design has been somewhat controversial since the new suites block full view of the spires from most angles.

Racing at Churchill Downs occurs in three meets though for the majority of its existence there were only two meets per year. The spring meet starts one week before the Derby and continues until early July. The Kentucky Derby is held the first Saturday in May and the Kentucky Oaks is run on the Friday before the Derby. A fall meet picks up in late October and closes Thanksgiving weekend in late November. A third meet in September was added in 2013. In addition to the track, clubhouse and stables, Churchill Downs also contains the Kentucky Derby Museum which focuses on the history of the Kentucky Derby and Churchill Downs. The museum also contains a number of exhibits exploring the training and racing of thoroughbred horses. It includes a 360-degree movie theater, cinema that shows the short film "The Greatest Race," a documentary about the Kentucky Derby. The museum is normally open year-round. In October 2013, Churchill Downs began installing a new, ultra high-definition video board built by Panasonic, which became operational in time for the 2014 Kentucky Derby. Called "The Big Board", it measures wide and high, with the bottom edge off the ground, and weighs . It was constructed along the outside of the backstretch of the dirt course facing the grandstand and infield. At the time, it was the largest ultra high-definition video board ever constructed. At the same time, 750 speakers were installed around the track.