Caracas (, ), officially Santiago de León de Caracas, abbreviated as CCS, is the capital and largest city of Venezuela, and the center of the Metropolitan Region of Caracas (or Greater Caracas). Caracas is located along the Guaire River in the northern part of the country, within the Caracas Valley of the Venezuelan coastal mountain range (Cordillera de la Costa). The valley is close to the Caribbean Sea, separated from the coast by a steep 2,200-metre-high (7,200 ft) mountain range, Cerro El Ávila; to the south there are more hills and mountains. The Metropolitan Region of Caracas has an estimated population of almost 5 million inhabitants. The center of the city is still ''Catedral'', located near Bolívar Square, though some consider the center to be Plaza Venezuela, located in the Los Caobos area. Businesses in the city include service companies, banks, and malls. Caracas has a largely service-based economy, apart from some industrial activity in its metropolitan area. The Caracas Stock Exchange and Petróleos de Venezuela (PDVSA) are headquartered in Caracas. Empresas Polar is the largest company in Venezuela. Caracas is also Venezuela's cultural capital, with many restaurants, theaters, museums, and shopping centers. Caracas has some of the tallest skyscrapers in Latin America, such as the Parque Central Towers. The Museum of Contemporary Art of Caracas is one of the most important in South America. Caracas has one of the highest per capita murder rates in the world, with 76 homicides per 100,000 inhabitants.

Before the city was founded in 1567, the valley of Caracas was populated by indigenous peoples. Francisco Fajardo, the son of a Spanish captain and a Guaiqueri ''cacica'', who came from Margarita, began establishing settlements in the area of La Guaira and the Caracas valley between 1555 and 1560. Fajardo attempted to establish a plantation in the valley in 1562 after these unsuccessful coastal towns, but it did not last long: it was destroyed by natives of the region led by Terepaima and Guaicaipuro. Fajardo's 1560 settlement was known as Hato de San Francisco, and another attempt in 1561 by Juan Rodríguez de Suárez was called Villa de San Francisco, and was also destroyed by the same native people. The eventual settlers of Caracas came from Coro, the German capital of their Klein-Venedig colony around the present-day coastal Colombia–Venezuela border; from the 1540s, the colony had been ''de facto'' controlled by Spaniards. Moving eastward from Coro, groups of Spanish settlers founded inland towns including Barquisimeto and Valencia before reaching the Caracas valley. On 25 July 1567, Captain Diego de Losada laid the foundations of the city of ''Santiago de León de Caracas''. De Losada had been commissioned to capture the valley, and was successful by splitting the natives into different groups to work with, then fighting and defeating each of them. The town was the closest to the coast of these new settlements, and the colonists retained a native workforce, which allowed a trade network to develop between Caracas, the interior, and Margarita; the towns further inland produced ample cotton products and beeswax, and Margarita was a rich source of pearls. The Caracas valley had a good environment for both agricultural and arable farming, which contributed to the system of commerce but meant that the town's population was initially sparse, as it was only large enough to support a few farms. In 1577, Caracas became the capital of the Spanish Empire's Venezuela Province under the province's new governor, Juan de Pimentel (1576–1583). In the 1580s, Caraqueños started selling food to the Spanish soldiers in Cartagena, who often docked in the coastal city when collecting products from the empire in South America. Wheat was growing increasingly expensive in the Iberian Peninsula, and the Spanish profited from buying it from Caracas farmers. This cemented the city in the empire's trade circuit. During the 16th and 17th centuries, the coast of Venezuela was frequently raided by pirates. With the coastal mountains of the Central Range as a barrier, Caracas was relatively immune to such attacks, compared to other Caribbean coastal settlements, but in 1595 the Preston–Somers expedition landed and around 200 English Privateers, including George Somers and Amyas Preston, crossed the mountains through a little-used pass while the town's defenders were guarding the more frequently used one. Encountering little resistance, the invaders sacked and set fire to the town after a failed ransom negotiation. The city managed to rebuild, using wheat profits and "a lot of sacrifice". In the 1620s, farmers in Caracas discovered that Cacao beans could be sold, first selling them to native people of Mexico and quickly growing across the Caribbean. The city became important in the Viceroyalty of New Spain, as well as moving from largely native slave labor to African slaves, the first of the Spanish colonies to become part of the slave trade. The city was successful and operated on cacao and slave trade until the 1650s, when an ''alhorra'' blight, the Mexican Inquisition of many of their Portuguese traders, and increased cacao production in Guayaquil greatly affected the market. This and the destructive 1641 earthquake put the city into decline, and they likely began illegally trading with the Dutch Empire, which Caraqueños later proved sympathetic to; by the 1670s, Caracas had a trading route through Curaçao. 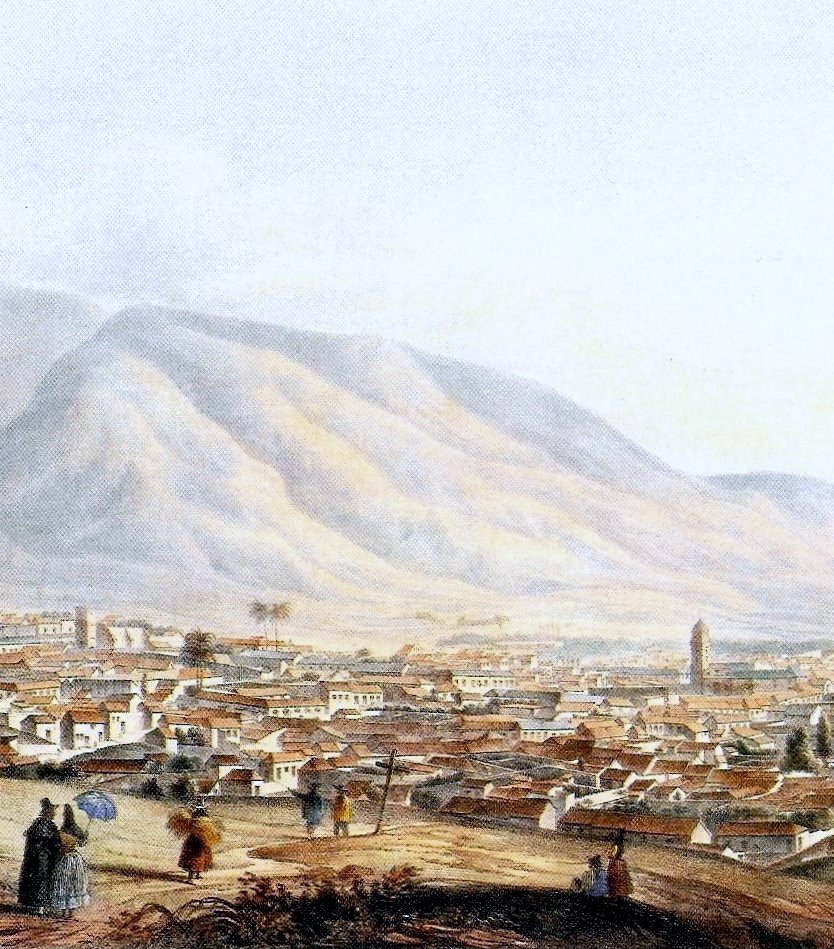 In 1728, the Guipuzcoan Company of Caracas was founded by the king, and the cacao business grew in importance. Caracas was made one of the three provinces of Nueva Granada, corresponding to Venezuela, in 1739. Over the next three decades the Viceroyalty was variously split, with Caracas province becoming the Venezuela province. Luis de Unzaga created the Captaincy General of Venezuela in the summer of 1777, with Caracas as the capital. Venezuela then attempted to become independent, first with the 1797 Gual and España conspiracy, based in Caracas, and then the successful 1811 Venezuelan Declaration of Independence. Caracas then came under worse luck: in 1812, an earthquake destroyed Caracas, a quarter of its population migrated in 1814, and the Venezuelan War of Independence continued until 24 June 1821, when Simón Bolívar defeated royalists in the Battle of Carabobo. Urban reforms only took place towards the end of the 19th century, under Antonio Guzmán Blanco: some landmarks were built, but the city remained distinctly colonial until the 1930s. Caracas grew in size, population, and economic importance during Venezuela's oil boom in the early 20th century. In the 1950s, the metropolitan area of Gran Caracas was developed, and the city began an intensive modernization program, funding public buildings, which continued throughout the 1960s and early 1970s. Cultural landmarks, like the University City of Caracas, designed by modernist architect Carlos Raúl Villanueva and declared a World Heritage Site by UNESCO in 2000; the Caracas Museum of Contemporary Art; and the Teresa Carreño Cultural Complex were built, as well as the Caracas Metro and a developed downtown area. Urban development was rapid, leading to the growth of slums on the hillsides surrounding the new city. Much of the city development also fell into disrepair come the end of the 20th century, with the 1980s oil glut and political instability like the Caracazo, meaning maintenance can not be sustained. The economic and social problems persist throughout the capital and country, characterized as the Crisis in Venezuela. By 2017, Caracas was the most violent city in the world.

The coat of arms was adopted in 1591. Simón de Bolívar, an ancestor of Venezuelan liberator Simón Bolívar, had been named the first procurator general of the Venezuelan province in 1589. He served as the representative of Venezuela to the Spanish Crown, and vice versa. In 1591, de Bolívar introduced a petition to King Philip II for a coat of arms, which he granted by Royal Cedula on 4 September that year in San Lorenzo. The coat of arms represents the city's name with the red Santiago (St. James') cross. It originally depicted "a brown bear rampant on a field of silver, holding between its paws a golden shell with the red cross of Santiago; and its seal is a crown with five golden points". In the same act, the king declared Caracas as "The Most Noble and Very Loyal City of Santiago de León de Caracas". The anthem of the city is the ''Marcha a Caracas'', written by the composer Tiero Pezzuti de Matteis with the lyrics by José Enrique Sarabia and approved in 1984.

Caracas is contained entirely within a valley of the Venezuelan Central Range, and is separated from the Caribbean coast by a roughly expanse of El Ávila National Park. The valley is relatively small and quite irregular, and the altitude varies from between above sea level; the historic center lies at about above sea level. This, along with the rapid population growth, has profoundly influenced the urban development of the city. The most elevated point of the Capital District, wherein the city is located, is the ''Pico El Ávila'', which rises to .