Beirut ( ; ar|بيروت| ) is the capital and largest city of Lebanon. , Greater Beirut has a population of 2.2 million, which makes it the third-largest city in the Levant region. The city is situated on a peninsula at the midpoint of Lebanon's Mediterranean coast. Beirut has been inhabited for more than 5,000 years as one of Phoenicia's most prominent city states , making it one of the oldest cities in the world. The first historical mention of Beirut is found in the Amarna letters from the New Kingdom of Egypt, which date to the 15th century BC. Beirut is Lebanon's seat of government and plays a central role in the Lebanese economy, with many banks and corporations based in the city. Beirut is an important seaport for the country and region, and rated a Beta + World City by the Globalization and World Cities Research Network. Beirut was severely damaged by the Lebanese Civil War, and its cultural landscape underwent major reconstruction.

The English name Beirut is an early transcription of the Arabic name (). The same name's transcription into French is , which was sometimes used during Lebanon's French occupation. The Arabic name derives from Phoenician Berot or Birut ( ). This was a modification of the Canaanite and Phoenician word , meaning "the wells", in reference to the site's accessible water table. The name is first attested in the 15thcenturyBC, when it was mentioned in three Akkadian cuneiform tablets of the Amarna letters, letters sent by King Ammunira of ''Biruta'' to or of Egypt. ''Biruta'' was also mentioned in the Amarna letters from King Rib-Hadda of Byblos. The Greeks hellenised the name as ( grc|Βηρυτός), which the Romans latinised as . When it attained the status of a Roman colony, it was notionally refounded and its official name was emended to to include its imperial sponsors.

Beirut was settled more than 5,000 years ago and the area had been inhabited for far longer. Several prehistoric archaeological sites have been discovered within the urban area of Beirut, revealing flint tools of sequential periods dating from the Middle Palaeolithic and Upper Paleolithic through the Neolithic to the Bronze Age. BeirutI (''Minet el-Hosn'') was listed as "the town of Beirut" (french: Beyrouth ville) by Louis Burkhalter and said to be on the beach near the Orient and Bassoul hotels on the Avenue des Français in central Beirut. The site was discovered by Lortet in 1894 and discussed by Godefroy Zumoffen in 1900. The flint industry from the site was described as Mousterian and is held by the Museum of Fine Arts of Lyon. BeirutII (''Umm el-Khatib'') was suggested by Burkhalter to have been south of Tarik el Jedideh, where P.E. Gigues discovered a Copper Age flint industry at around above sea level. The site had been built on and destroyed by 1948. BeirutIII (''Furn esh-Shebbak''), listed as , was suggested to have been located on the left bank of the Beirut River. Burkhalter suggested that it was west of the Damascus road, although this determination has been criticised by Lorraine Copeland. P. E. Gigues discovered a series of Neolithic flint tools on the surface along with the remains of a structure suggested to be a hut circle. Auguste Bergy discussed polished axes that were also found at this site, which has now completely disappeared as a result of construction and urbanisation of the area. BeirutIV (''Furn esh-Shebbak'', river banks) was also on the left bank of the river and on either side of the road leading eastwards from the Furn esh Shebbak police station towards the river that marked the city limits. The area was covered in red sand that represented Quaternary river terraces. The site was found by Jesuit Father Dillenseger and published by fellow Jesuits Godefroy Zumoffen, Raoul Describes and Auguste Bergy. Collections from the site were made by Bergy, Describes and another Jesuit, Paul Bovier-Lapierre. Many Middle Paleolithic flint tools were found on the surface and in side gullies that drain into the river. They included around 50 varied bifaces accredited to the Acheulean period, some with a lustrous sheen, now held at the Museum of Lebanese Prehistory. Henri Fleisch also found an Emireh point amongst material from the site, which has now disappeared beneath buildings. BeirutV (''Nahr Beirut'', Beirut River) was discovered by Dillenseger and said to be in an orchard of mulberry trees on the left bank of the river, near the river mouth, and to be close to the railway station and bridge to Tripoli. Levallois flints and bones and similar surface material were found amongst brecciated deposits. The area has now been built on. BeirutVI (Patriarchate) was a site discovered while building on the property of the Lebanese Evangelical School for Girls in the Patriarchate area of Beirut. It was notable for the discovery of a finely styled Canaanean blade javelin suggested to date to the early or middle Neolithic periods of Byblos and which is held in the school library. BeirutVII, the Rivoli Cinema and Byblos Cinema sites near the Bourj in the Rue el Arz area, are two sites discovered by Lorraine Copeland and Peter Wescombe in 1964 and examined by Diana Kirkbride and Roger Saidah. One site was behind the parking lot of the Byblos Cinema and showed collapsed walls, pits, floors, charcoal, pottery and flints. The other, overlooking a cliff west of the Rivoli Cinema, was composed of three layers resting on limestone bedrock. Fragments of blades and broad flakes were recovered from the first layer of black soil, above which some Bronze Age pottery was recovered in a layer of grey soil. Pieces of Roman pottery and mosaics were found in the upper layer. Middle Bronze Age tombs were found in this area, and the ancient tell of Beirut is thought to be in the Bourj area.

The oldest settlement of Beirut was on an island in the river that, but the channel became silted up and it joined it to the mainland. Excavations in the downtown area have unearthed layers of Phoenician, Hellenistic, Roman, Byzantine, Arab, Crusader, and Ottoman remains.

The Phoenician port of Beirut was located between Rue Foch and Rue Allenby on the north coast. The port or harbour was excavated and reported on several years ago and now lies buried under the city. Another suggested port or dry dock was claimed to have been discovered around to the west in 2011 by a team of Lebanese archaeologists from the Directorate General of Antiquities of Lebanese University. Controversy arose on 26 June 2012 when authorisation was given by Lebanese Minister of Culture Gaby Layoun for a private company called Venus Towers Real Estate Development Company to destroy the ruins (archaeological site BEY194) in the $500 million construction project of three skyscrapers and a garden behind Hotel Monroe in downtown Beirut. Two later reports by an international committee of archaeologists appointed by Layoun, including Hanz Curver, and an expert report by Ralph Pederson, a member of the institute of Nautical Archaeology and now teaching in Marburg, Germany, dismissed the claims that the trenches were a port, on various criteria. The exact function of site BEY194 may never be known, and the issue raised heated emotions and led to increased coverage on the subject of Lebanese heritage in the press.

In 140BC, the Phoenician city was destroyed by Diodotus Tryphon in his conflict with Antiochus VII Sidetes for the throne of the Hellenistic Seleucid monarchy. Laodicea in Phoenicia was built upon the same site on a more conventional Hellenistic plan. Present-day Beirut overlies this ancient one, and little archaeology was carried out until after the civil war 1991. The salvage excavations after 1993 have yielded new insights into the layout and history of this period of Beirut's history. Public architecture included several areas and buildings. Mid-1st-century coins from Berytus bear the head of Tyche, goddess of fortune; on the reverse, the city's symbol appears: a dolphin entwines an anchor. This symbol was later taken up by the early printer Aldus Manutius in 15th century Venice. After a state of civil war and decline the Seleucid Empire faced, King Tigranes the Great of the Kingdom of Armenia conquered Beirut and placed it under effective Armenian control. However, after the Battle of Tigranocerta, Armenia forever lost their holdings in Syria and Beirut was conquered by Roman general Pompey.

Laodicea was conquered by Pompey in 64 BC and the name Berytus was restored to it. The city was assimilated into the Roman Empire, soldiers were sent there, and large building projects were undertaken. From the 1st century BC, the Bekaa Valley served as a source of grain for the Roman provinces of the Levant and even for Rome itself. Under Claudius, Berytus expanded to reach the Bekaa Valley and include Heliopolis (Baalbek). The city was settled by Roman colonists who promoted agriculture in the region. As a result of this settlement, the city quickly became Romanized, and the city became the only mainly Latin-speaking area in the Syria-Phoenicia province. In 14BC, during the reign of Herod the Great, Berytus became a colony, one of four in the Syria-Phoenicia region and the only one with full Italian rights (') exempting its citizens from imperial taxation. Beirut was considered the most Roman city in the eastern provinces of the Roman Empire. Furthermore, the veterans of two Roman legions were established in the city of Berytus by emperor Augustus: the 5th Macedonian and the 3rd Gallic Legions. Berytus's law school was widely known; two of Rome's most famous jurists, Papinian and Ulpian, were natives of Phoenicia and taught there under the Severan emperors. When Justinian assembled his ''Pandects'' in the 6th century, a large part of the corpus of laws was derived from these two jurists, and in AD533 Justinian recognised the school as one of the three official law schools of the empire. In 551, a major earthquake struck Berytus, causing widespread damage. The earthquake reduced cities along the coast to ruins and killed many, 30,000 in Berytus alone by some measurements. As a result, the students of the law school were transferred to Sidon. Salvage excavations since 1993 have yielded new insights in the layout and history of Roman Berytus. Public architecture included several bath complexes, Colonnaded Streets, a circus and theatre; residential areas were excavated in the Garden of Forgiveness, Martyrs' Square and the Beirut Souks. 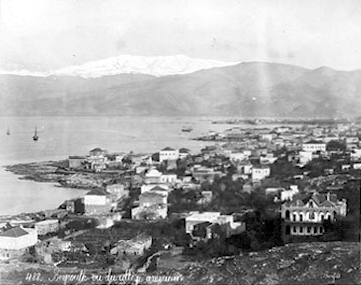 Beirut was conquered by the Muslims in 635.