upAgora of Tyre The agora (; grc|ἀγορά ''agorá'') was a central public space in ancient Greek city-states. It is the best representation of a city-state's response to accommodate the social and political order of the polis. The literal meaning of the word "agora" is "gathering place" or "assembly". The agora was the center of the athletic, artistic, business, social, spiritual and political life in the city. The Ancient Agora of Athens is the best-known example.

Early in Greek history (10th–4th centuries BC), free-born citizens would gather in the agora for military duty or to hear statements of the ruling king or council. Later, the agora also served as a marketplace, where merchants kept stalls or shops to sell their goods amid colonnades. This attracted artisans who built workshops nearby. From these twin functions of the agora as a political and a commercial space came the two Greek verbs , ''agorázō'', "I shop", and , ''agoreúō'', "I speak in public".

The Athenian Agora lies beneath the northern slope of the Acropolis. The Ancient Agora of Athens was the primary meeting ground for Athenians, where members of democracy congregated affairs of the state, where business was conducted, a place to hang out, and watch performers and listen to famous philosophers. The importance of the Athenian agora revolved around religion. The agora was a very sacred place, in which holiness is laid out in the architecture of the ground in which it lay upon. The layout of the agora was centered around the Panathenaic Way, a road that ran through the middle of Athens and to the main gate of the city, Dipylon. This road was considered tremendously sacred, serving as a travel route for the Panathenaic festival, which was held in the honor of the goddess Athena every four years. The agora was also famously known for housing the Temple of Hephaestus, the Greek god of metalworking and craftsmen. This temple is still in great condition to this day. Other temples priorly standing in the agora include honor for Zeus, Athena, Apollo, and Ares.


Gender roles in the Athenian Agora

Women in ancient Athens were not equivalent to men in any way, females were considered to be homemakers. The Athenian agora was the arena of Athenian politics and business, of a civic order primarily dominated by male citizens. Spokesman of the Athenian patriarchy preached that no female should be in public places, the Agora. Public places were considered the property of male citizens.

In the 4th and 5th centuries, there was significant evidence of women being innkeepers and merchants selling their products in the market of the Athenian agora. This part of the agora was called the "women's agora." Some of the products they sold include fruits, clothes, pottery, religious and luxury goods, perfume, incense, purple dye, wreaths, and ribbons.

In terms of the ''epikleros law,'' women are provided material security without effectively putting any property in their control. Further, property was inherited through the males line, if there is no male to succeed, then the daughter might become a provisional bearer of the property, in Athenian agora. The daughter is only considered supplementary until she is married.

Athenian marriages were not celebrations of true love consummated, but they included quite the celebration. Marriages were contractual agreements between Athenian households, women would leave their families and all they knew and move with their spouse and family. These were occasions that brought women into the public view they often didn't share with the men in their communities. Marriages were easily dissolved in Ancient Greece, if an Athenian rejected his wife, she would go back home to her ''kyrios'' (her father), and her dowry went with her. Divorces were, in practice, almost exclusively initiated by males, either by the husband rejecting a wife, or by the wife's relatives, either on their own or at the instigation of the wife who wanted to escape a marriage where she dealt with maltreatment. A women of the 5th century, Hipparete, took affairs into her own hands, and left her philandering husband, and filed for divorce. This initiative didn't work out too well in her favor, and her husband humiliated by dragging her very publicly through the Athenian agora and took her back home, she made all the gossip headlines of the agora. This treatment would happen to many women in the ancient Athenian agora.

The Athenian calendar glistened with religious festivals that were held in the Athenian agora. These festivals were significant for women as they provided a reason for them to leave their homes and socialize with people outside their family. Also, many of these religious festivals were performed by women, these duties included officiating the worship of goddess Athena, the namesake of the city, Athens. Doing these rituals for goddesses are a prerequisite for the daughters of aristocratic families. A large number of Athenian girls took part in ''Arkteia,'' or bear-festival, in honor of goddess Artemis, this festival was to embark young girls into women-hood, preparing them for marriage and child birth. Women of all ranks and classes could be seen making offerings at the small shrines that dotted the agora in Athens. Also, women get to set up more substantial memorials to their piety within the agora. Religious festivals were a huge opportunity for the women of Athens to participate in their social culture.


Marble-workers in the Athenian Agora

As of the early 5th century, the Ancient Agora of Athens was known as glorious and richly decorated, set with famous works of art, many of them sculpted from marble. The buildings of the Athenian Agora had marble decoration and housed dedications in the form of marble statues. Finds from the agora excavations identified that generations of marble-workers made the agora of Athens an important center for the production of marble sculptures. Marble-workers made sculptures, marble weights, sundials, furniture parts, an assortment of kitchen utensils. In the excavations of the Athenian agora revealed the remains of many marble-working establishments, and various unfinished statues, reliefs, and utilitarian objects.


Marble workshops in the Agora

Excavations of the Athenian agora has proved that marble-workers were very active, the earliest workshops being established in the early 5th century. The earliest areas used by marble workers was the residential and industrial district southwest of the agora. Another area where marble-workers set up shop was in the South Square, after the sack of Athens by the Roman general Sulla in 86 B.C. As the South Square was in ruins, marble-workers were attracted to the remains of the marble temples. A workshop from the southern corner of the agora was also important, the Library of Pantainos rented out rooms to marble-workers.


Famous marble-workers in the Agora

Literacy and evidence from excavations give a sense of statues and famous marble sculptors in the Athenian agora. These famous marble-workers of the Agora include, the 5th-century master Phidias and his associate Alkamenes, and the 4th-century sculptors Praxiteles, Bryaxis, and Euphranor.

Phidias was the most well known marble-worker to have worked in the agora. He was famous for his gold and ivory cult statue of Zeus at Olympia, and for his three lost sculptures of Athena.

A well-known associate of Phidias was Alcamenes, whose most important works in the agora were the bronze cult statues of Hephaestus and Athena in the Temple of Hephaestus.

These famous sculptors are attested in the agora by the discovery of signed pieces of work that could no longer be preserved. A marble statue signed and possibly carved by Bryaxis was found in the agora behind the Royal Stoa.

The 4th century marble-worker known for his sculptures, made a colossal statue Apollo for the Temple of Apollo Patroos on the west side of the agora.


Location and constituents of the Athenian Agora 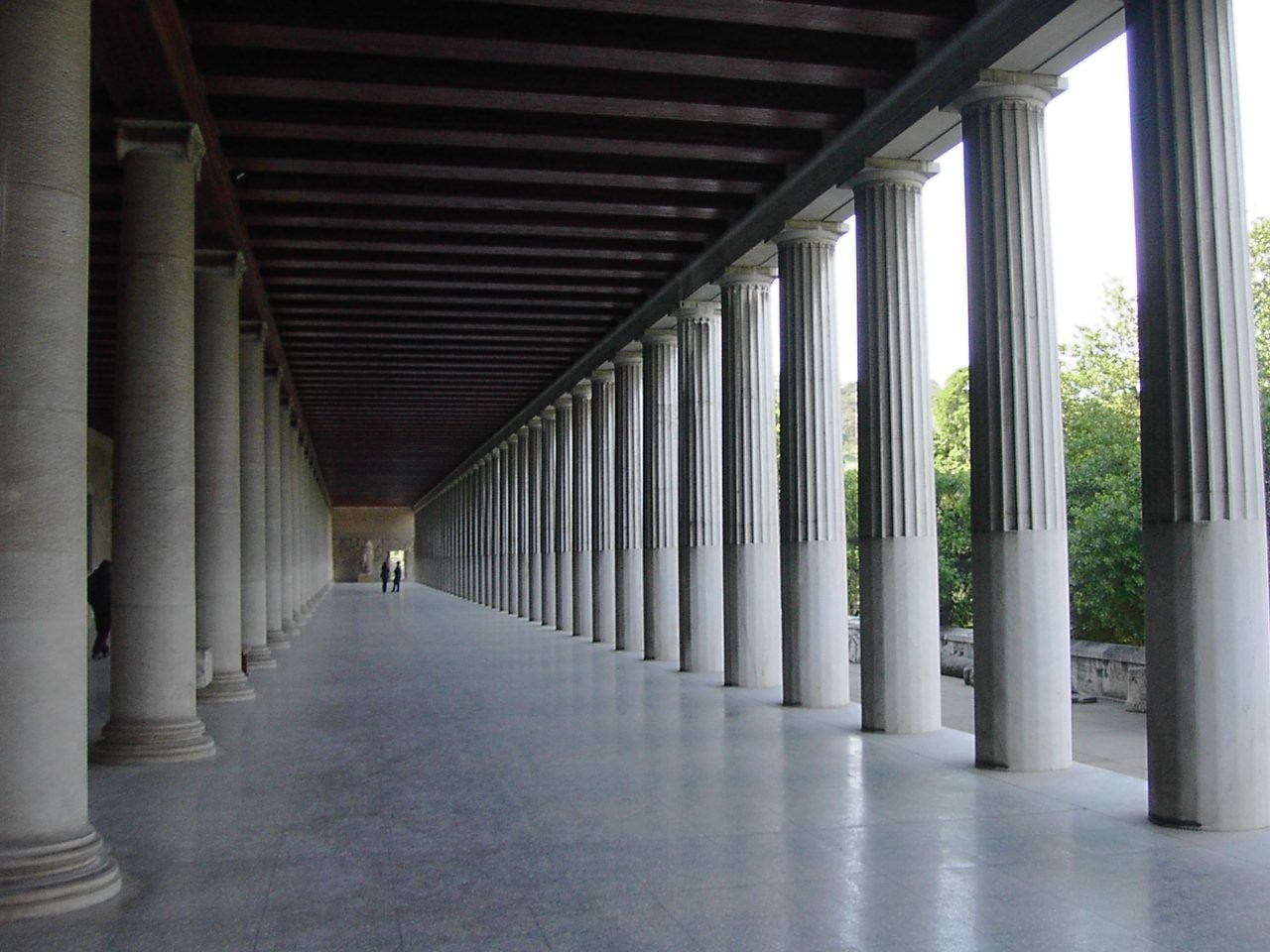 The agora was usually located in the middle of a city or near the harbor. Agoras were built of colonnades, or rows of long columns, and contained stoae, also known as a long open walk way below the colonnades. They were beautifully decorated with fountains, trees, and statues. When the Athenian agora was rebuilt after the Greco-Persian Wars, colonnades and stoae were not incorporated.

The term ''agoraphobia'' denotes a phobic condition in which the sufferer becomes anxious in environments that are unfamiliar – for instance, places where they perceive that they have little control. Such anxiety may be triggered by wide-open spaces, by crowds, or by some public situations, and the psychological term derives from the agora as a large and open gathering place.