The 2002 NFL season was the 83rd regular season of the National Football League. The league went back to an even number of teams, expanding to 32 teams with the addition of the Houston Texans; the league has remained static with 32 teams since. The clubs were then realigned into eight divisions, four teams in each. Also, the Chicago Bears played their home games in 2002 in Champaign, Illinois at Memorial Stadium because of the reconstruction of Soldier Field. The NFL title was eventually won by the Tampa Bay Buccaneers when they defeated the Oakland Raiders 48–21 in Super Bowl XXXVII, at Qualcomm Stadium in San Diego, California on January 26, 2003.

With the Houston Texans joining the NFL, the league's teams were realigned into eight divisions: four teams in each division and four divisions in each conference. In creating the new divisions, the league tried to maintain the historical rivalries from the old alignment, while at the same time attempting to organize the teams geographically. Legally, three teams from the AFC Central (Cincinnati, Cleveland, and Pittsburgh) were required to be in the same division as part of any realignment proposals; this was part of the NFL's settlement with the city of Cleveland in the wake of the 1995 Cleveland Browns relocation controversy.

The major changes were: * The Indianapolis Colts, Jacksonville Jaguars, Tennessee Titans, and expansion Houston Texans were placed into the newly formed AFC South. * The Atlanta Falcons, Carolina Panthers, New Orleans Saints, and Tampa Bay Buccaneers were placed into the newly formed NFC South. * The teams in the AFC Central and NFC Central were placed in the new AFC North and NFC North respectively, apart from the Titans, Jaguars and Buccaneers. * The Seattle Seahawks became the only team to switch conferences, moving from the AFC West to the NFC West. * The Arizona Cardinals moved from the NFC East to the NFC West. They had originally played in Chicago and then St. Louis before moving to Tempe, Arizona in 1988. Additionally, the arrival of the Texans meant that the league could return to its pre-1999 scheduling format in which no team received a bye during the first three weeks or last seven weeks of the season. From 1999 to 2001, at least one team sat out each week (including the preseason) because of an odd number of teams in the league (this also happened in 1960, 1966, and other years wherein the league had an odd number of teams). It nearly became problematic during the previous season due to the September 11 attacks, since the San Diego Chargers had their bye week during that week and the league nearly outright canceled that week's slate of games. The league also introduced a new eight-year scheduling rotation designed so that all teams will play each other at least twice during those eight years, and play in every other team's stadium at least once. Under scheduling formulas in use from 1978 to 2001, two teams in different divisions have gone over 15 seasons without playing each other. Under the new scheduling formula, only two of a team's games each season are based on the previous season's record, down from four under the previous system. All teams play four interconference games. An analysis of win percentages in 2008 showed a statistical trend upwards for top teams since this change; the top team each year then averaged 14.2 wins, versus 13.4 previously. The playoff format was also modified: four division winners and two wild cards from each conference now advance to the playoffs, instead of three division winners and three wild cards. In each conference, the division winners are now seeded 1 through 4, and the wild cards are seeded 5 and 6. In the current system, the only way a wild card team can host a playoff game is if both teams in the conference's championship game are wild cards. However, the number of playoff teams still remained at 12, where it was from to . Since , the number of wild card teams went back to three.

The 2002 NFL Draft was held from April 20 to 21, 2002 at New York City's Theater at Madison Square Garden. With the first pick, the Houston Texans selected quarterback David Carr from Fresno State University.

*A player who touches a pylon remains in-bounds until any part of his body touches the ground out-of-bounds. *Continuing-action fouls now become dead-ball fouls and will result in the loss of down and distance. *Any dead-ball penalties by the offense after they have made the line to gain will result in a loss of 15 yards and a new first down. Previously, the 15 yard penalty was enforced but the down was replayed. 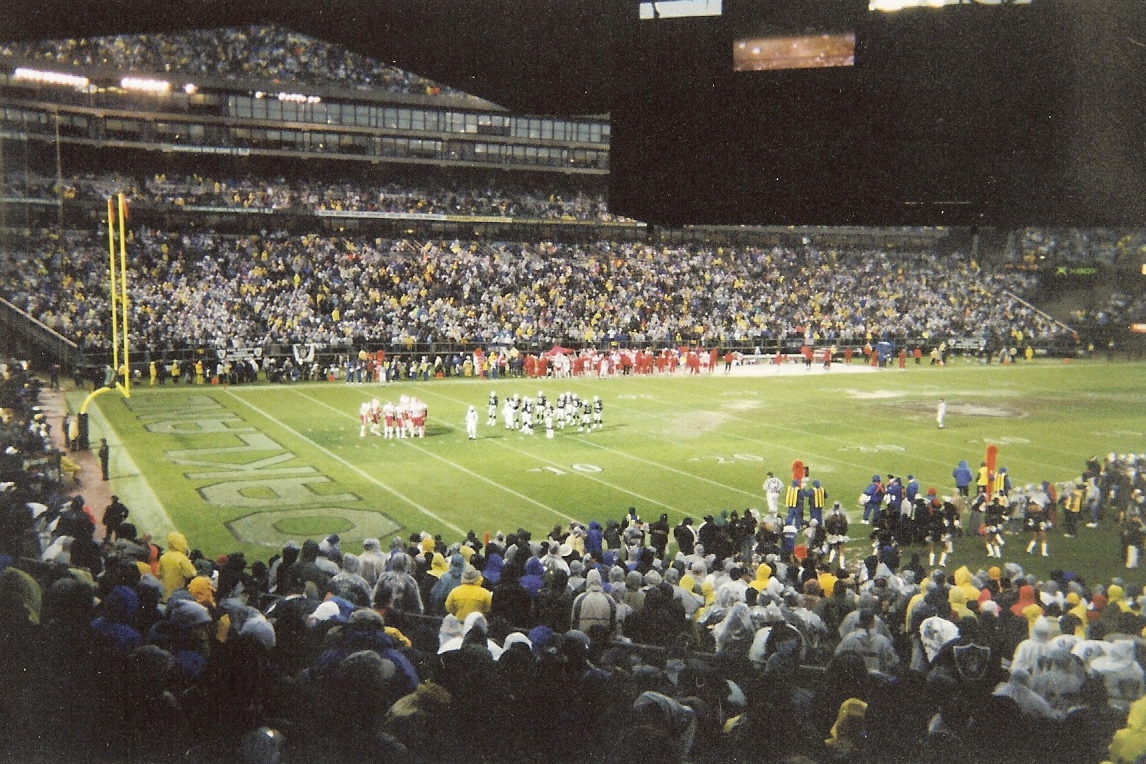 *The act of batting and stripping the ball from a player is officially legal. *Chop-blocks are illegal on kicking plays. *Hitting a quarterback helmet-to-helmet anytime after a change of possession is illegal. *After a kickoff, the game clock will start when the ball is touched legally in the field of play. Previously, the clock started immediately when the ball was kicked. *Inside the final two minutes of a half/overtime, the game clock will not stop when the player who originally takes the snap is tackled behind the line of scrimmage (i.e. sacked). Also, with the opening of the NFL's first stadium with a retractable roof, Reliant Stadium, the following rules were enacted: *The home team must determine whether their retractable roof is to be opened or closed 90 minutes before kickoff (regular season only; in the playoffs, the NFL determines whether the roof is open or closed). *If it is closed at kickoff, it cannot be reopened during the game. *If it is open at kickoff, it cannot be closed during the game unless the weather conditions become severe. This rule was amended in to allow a roof to be opened or closed at halftime, at the home team's discretion.

* Johnny Unitas who died on September 11, 2002 from a heart attack. On Week 2 of the season each early game played held a pre-game tribute to Unitas. * Dick "Night Train" Lane * Mike Webster

The following teams and players set all-time NFL records during the season:

Reebok took over the contract to be the official athletic supplier to the NFL for all 32 teams’ uniforms. Previously, all teams had individual contracts with athletic suppliers. American Needle, which had a contract with a few teams before the Reebok deal, challenged the NFL in court over Reebok's exclusive deal, with the NFL effectively stating that it was a “single-entity league” instead of a group consisting of various owners. The case eventually went all the way to the Supreme Court of the United States. In 2009, the Supreme Court agreed to hear ''American Needle, Inc. v. National Football League''. In 2010, the court ruled that the NFL is not a single entity. Reebok remained the league's athletic supplier through the 2011 NFL season, when Nike took over the contract for the 2012 NFL season. Reebok had initially announced when the deal was signed in 2000 that aside from the expansion Texans, all NFL teams would be wearing new uniforms for the 2002 season. However, after protests from several owners—most vocally Pittsburgh Steelers owner Dan Rooney—Reebok later rescinded the proposal. Reebok did, however (by player request to reduce holding calls), shorten the sleeves on the jerseys for teams that hadn't done so already (most players had been for the previous decade tying the sleeves tight around their arms to prevent holding) and made the jerseys tighter-fitting. This is perhaps most noticeable on the Indianapolis Colts jerseys, where the shoulder stripes, which initially went from the top of the shoulders all the way underneath the arms, were truncated to just the top portion of the shoulders.

Although Reebok rescinded the idea of all NFL teams wearing new uniforms for the 2002 season, the Buffalo Bills and Seattle Seahawks did redesign their uniforms, with the Seahawks also unveiling an updated logo in honor of their move to Seahawks Stadium and the NFC. * The Buffalo Bills introduced new uniforms featuring, among others, a darker shade of blue, nickel gray as an accent color, and red side panels on both the home and away jerseys * The Carolina Panthers added blue third alternate uniforms * The Cleveland Browns added orange third alternate uniforms * The Denver Broncos added orange third alternate uniforms * The Houston Texans expansion team introduced dark blue helmets; dark blue and white jerseys, both with red trim; and white pants to be worn with the blue jerseys and blue pants with the white jerseys. The new helmet logo features a bull head colored and shaped in such a way to resemble the flag of Texas and the state of Texas. * The Jacksonville Jaguars added black third alternate uniforms, and introduced new black pants with home uniforms for selected games. * The New Orleans Saints returned to wearing gold pants with their black jerseys, and with their white jerseys for selected games. They introduced a gold alternate jersey but only wore it for one game. * The New York Jets began wearing green pants with either their green or white jerseys * The San Diego Chargers switched back to navy pants with white jerseys, also brought back throwback powder blue uniforms for one game. * The Seattle Seahawks introduced new uniforms featuring, among others, a lighter "Seahawks Blue", a darker "Seahawks Navy" and lime green piping. The helmet was changed from silver to the darker navy color. The helmet logo was also modified, re-colored accordingly to the new team colors, and the eyebrows and eyes redrawn to make it a more aggressive bird. * The St. Louis Rams removed the side panels from their jerseys. * The Washington Redskins introduced replicas of their 1960s design as a third alternate uniform.